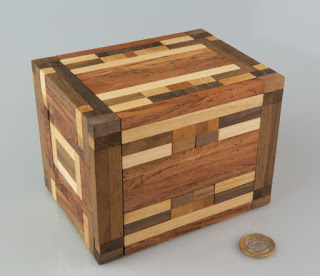 I first came across Johan on the old Renegades forum a few years ago – he went by the handle “Ou Toppie” which picked him out in a crowd as a fellow-South African (with a good sense of humour!) so we traded the occasional message and I enjoyed the opportunity to exercise my dwindling Afrikaans.


Sometime over the last couple of years Johan began posting more and more pictures of the puzzles he was making for himself and several of us chorused approval and occasionally enquired about the possibility of perhaps buying a copy of something from him. Somewhere along the way he began entertaining the idea of perhaps making a couple of puzzles for sale and we piled in – and there’s a rather nice copy of Derek’s Really Bent Board Burr in my cabinet as a result…


Late last year Johan picked up an abandoned project and began work on improving his Wish Cube – a design he’d originally intended submitting for the Apothecary Chest project. A pic or two appeared online and a while later Jack Krijnen popped in to visit and between the two of them they improved the design a little – to the extent that Johan decided he’d be prepared to make some for sale – I threw my hat in the ring immediately. 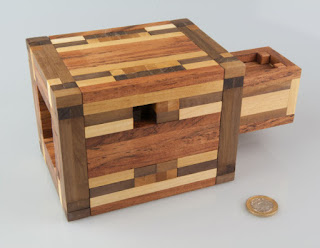 It arrived early in the New Year and I’m rather glad I took a copy – this is a statement puzzle! It ain’t dainty!
There is a lot of wood in there… all rather nicely treated and carefully finished – a serious labour of love!


At its heart, it’s a box – sorry Kevin, it’s a box.
There’s a drawer in the centre that contains a puzzling set of pentominoes (and some extra space) but that drawer is well and truly locked in place in the surrounding frame. That frame houses a set of 14 burr pieces that all interact and keep the drawer locked in place… and that frame is made up of a huge number of pieces itself…


Having removed the drawer, you’ll find a set of pentomino pieces under a cover in the corner – securely jammed in place by a handy spare stick – tip them out and then try and get them back in there under the cover… serious challenge. 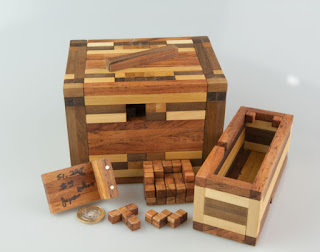 OK, back to the outer piece: your next challenge is to remove the burr bits without dismantling the outer cage (doing it while dismantling the outer cage isn’t hugely challenging, so leave the cage alone for now…). Once you’ve removed all the burr-y bits, you can dismantle the cage itself and scramble the pieces… go off and make yourself a nice cup of coffee and then settle down for a few hours while you reassemble everything – that is a nice challenge – especially if you assemble the cage first and then introduce the burr-y bits.


Having taken it apart and reassembled it a few times you have to admire the design, and the attention to detail with all of the potentially vulnerable cubies having been securely pinned in place – thanks Johan!


…it’s a great big onion of a puzzle that just keeps on puzzling the puzzlist!

Bonus Puzzle! Johan tossed a couple of deeply African handmade Buttonhole Puzzles into the box - one for me and one for a mate - Thanks Johan! :-) 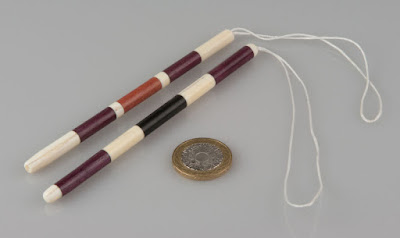