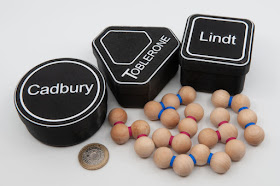 George Bell has a knack for designing mean puzzles that mess with my head – admittedly I’m setting a low bar here – but I suspect that his love of playing with spheres and truncated octahedra manage to confuse some others as well.

My latest puzzle from George’s Etsy shop was Triple Chocolate Box – his entry in the 2020 Nob Yoshigahara Puzzle Design competition. This puzzle makes great use of George’s new 3D printer to produce the three black and white boxes adorned with your favourite brands of chocolate. Your task is to pack the 24 little (slightly wooden) chocolates into each of the three boxes in turn, so that their lids are fully closed. Of course George has helpfully joined those 24 little balls into six sets of differently shaped pieces, just so you aren’t bored to death by a trivial packing task.

Clearly the boxes presented provide a basic round, triangular and square shape for the packing, but the boxes are all slightly different heights… which is interesting.

When the puzzle arrived, the pieces were all snugly inside the Lindt box, and George’s helpful note suggested tipping the pieces out blindly before playing – and that’s great advice, but let me assure you, gentle puzzler, that even if you catch a view of the pieces as they come tumbling out, it will help you not a jot, because they do tumble rather chaotically and then lie there on your desk mocking you, of perhaps that was just me. 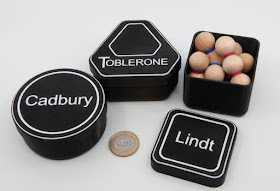 …which is probably exactly what George was hoping, because when I moved on to the triangular box, I found that most of what I thought I knew, was pretty useless. Try as I might to get things to work in the second box, they wouldn’t… until I literally went right back to basics – and that really helped. So I built up a while new model of “how things worked” and managed to squeeze them all into the second box.

At this point I’m probably feeling a little smug and I dive into our old friend the Lindt box… after all, I’ve got two different packing schemas available to me so it’s just a case of finding the best one for the job and bashing through it…

Of course George strikes again – and soon enough you realise that neither of those is any use at all… so you head back to the drawing board yet again… the final box is pretty mean and the first two do a great job of gently leading you up the garden path before the third one positively crushes you. You’ll need what you learned on the first two, but you’ll need to find an altogether different approach, yet again.

It does provide an excellent sense of satisfaction when you finally find The Third Way and you can drop that final little piece neatly into place… what I love most about this puzzle is the fact that George’s three boxes force you into totally different ways of packing those little spheres together – each of them seemingly pretty compact, and all of them recycling the same set of pieces.