A little history lesson for you: the puzzle exchange that is pretty central to IPPs these days was first introduced by Edward Hordern at the London IPP in 1989 – the story goes that he gave folks the alternative of bringing along a bunch of new puzzles (40) to exchange with everyone else, or pay a hefty entrance fee (£30!). Most folks chose the former and the rest is history.

These days first timers aren’t allowed to participate as exchangers, however they are allowed to assist someone who is, so I was absolutely delighted to have been invited to be Wil Strijbos’ assistant for the exchange. Not only would I get to see the puzzle exchange from the inside at the hands of a veteran, but Wil being Wil, I was also pretty much guaranteed a good time as well.

I got myself into the ballroom in plenty of time and managed to find Wil’s home base where I recognised  boxes full of his exchange puzzle from the sneak peak I’d been given a couple of weeks earlier. The only snag was the distinct lack of Wil. I wandered around the room in the hopes of tracking him down chatting to someone, but he was nowhere to be found. When the introductory speeches began, I started having visions of trying to pass myself off as Wil for the day (although anyone who’s met either one of us was unlikely to be fooled!). Just as the speeches ended, Wil sauntered in – ready for action.

Each exchanger has a list of everyone’s names and as the assistant (or bag man as someone put it!) it’s my job to make sure that Wil gets around to everyone and exchanges puzzles with them, hanging onto the puzzles received and keeping a handy supply of his puzzles ready to pass out.
We’d alternate between bouts of sitting at the table and letting folks come over to us and then wandering around and meeting folks at their tables.

Wil had strung together quite a story about his exchange puzzle which he presented firstly as the Solution Sheet(!) - a little card with the words “Solution” and “Exchange” on it and a picture of a bottle with a red rod sticking out of it, a ball bearing next to the bottle and a padlock securing the rod inside the bottle ... and yes, a pair of keys was provided, one helpfully already inserted into the padlock, the other attached to the top of the rod.

A yellow card with three challenges went along with the Solution Sheet and this explained the challenges as:

After the description of the puzzle, Wil would hand over a copy to the exchanger in the box that the bottles originally came in, showing them to be specimen bottles – which generally triggered another round of classic Strijbos remarks tailored to the particular audience (“Only been used once”, “It’s OK I shook it out” and “If you don’t like the puzzle it might be useful anyway!”).

I’m probably biased, but I think that Wil’s Exchange puzzle was an absolute cracker! It’s a classic Strijbos bottle puzzle, with a twist ... and all the additional obfuscation around the Solution Sheet at the beginning is terrific, especially when you realise what all that was really about once you’ve solved the puzzle.

Wil has a real knack for entertaining folks and after the first couple of exchanges I got used to where the laughs were likely to come and made sure I had my camera ready –and managed to get some cracking pics of puzzlers having some serious belly-laughs at Wil’s presentation. A few folks made a meal of the chain link and insisted on posing for pics with the chain link as well – puzzlers are a good bunch.  A few of the exchangers even ended up giving me a copy of their exchange puzzles for no good reason – thanks!

On the day there were 79 puzzle exchangers in the room, and we had to repeat that process about 60-odd times (allowing for a number of occasions when a mob would arrive more or less at the same time and they’d all watch one another’s explanations together) – the exchange was scheduled for 6 hours and that might sound like a really long time, but it literally flew by. Wil and I scarcely had time to wolf down our sandwiches at lunch time between visits from wandering puzzle exchangers and we were one of the last to complete the final puzzle exchanges as the organisers were trying to get the room set up for the lectures that were up next.

Jerry Slocum gave a talk on the history and development of IPPs over the years. From the first IPP that Jerry and Margot Slocum hosted in their own home, attracting 10 puzzlers from around the world, the International Puzzle Party has grown beyond recognition in some respects (this year there were about 400 delegates from around the world, with organised tours of the city and beyond for both puzzlers and their long-suffering partners, huge banquets, and a puzzle competition featuring 80 new designs) yet in other respects it’s still exactly the same – it’s about puzzlers from around the world getting together to share and talk about puzzles with old friends and new ones ... even though the numbers are so much higher, it still manages to be a personal event where you can spend time with people who share your passions – no mean feat!

Jillian Hinchcliffe gave us an interesting insight into the work they have been doing at the Lilly Library on housing the Slocum Collection and some background on the library itself. The presentation included some photos from the pre-IPP trip that a number of folks had taken to visit the library, showing several well known puzzlers lying around on the floor trying to solve one of the puzzle desks commissioned for the collection. It was really wonderful to see how much effort has gone into ensuring that the collection is available to folks interested in the puzzles – with everything available for viewing either immediately or at a couple of hours notice for items stored in the archive. It looks like all  the effort that Jerry put into finding a suitable home for his collection has been worthwhile – the Lilly Library folks really seem to have embraced the collection and making it available wonderfully. Jillian also thanked everyone who'd already suggested improvements to some of the cataloguing data on the web site and asked everyone to keep submitting any corrections required. 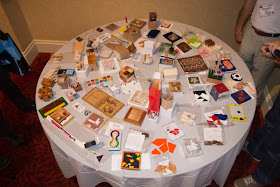 Frans de Vreugd and Gary Foshee gave a brief canter through the development of the IPP souvenir books and the IPP Host gifts respectively – giving some of us newcomers a great insight into some of the finer details of IPPs that are seldom seen outside of the actual IPP.