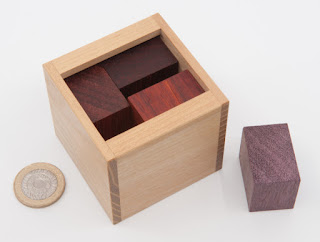 First there was Euklid, and I did not enjoy it – managing to eventually find a single solution.

Then there was Euklid for Kids,and I did enjoy it…

Now we have Euklid for Nick and I started out not liking it too… but now I love it – but I’m getting a bit ahead of the story here, so let’s wind back a little…

After the launch of Euklid, the designer Volker Latussek was probably a little disappointed and more than a little non-plussed when Nick announced he’d found about twenty solutions for it. Volker decided this should be addressed and duly emerged from a darkened design space (in my mind at any rate!) with his answer to Nick – Euklid for Nick … a Euklid variant that definitely won’t have that many solutions. (And probably only has one solution!)

This one comes with a familiar Euklid-family lipped box with a few pieces to be tipped into it so that the pieces are all below the lips. As always, the Acacia box is beautifully made by the guys at Pelikan and this time we have two sizes of pieces – three Padauk blocks and four Purpleheart blocks to put into the box. Simples!

When the puzzle arrives one or two pieces are peeking out just above the lip and there’s clearly a lot of room underneath them and you’re briefly conned into believing that this is going to be a doddle. Tipping the pieces out with a bit of a shake of the box seems to confirm your suspicions.

Putting them back in so that they sit below the lip is, however, quite a challenge. One that has “entertained” me for several weeks now – long enough for me to develop a healthy dislike for this puzzle, even if it was twinned with a good deal of grudging respect for it.

Over the course of several weeks my puzzling buddies (including the puzzle’s namesake!) have laughed at my inability for put the blocks inside the box, and I kept bashing away at it… last weekend Steve and I ended up working on our respective copies on a Zoom call, and about an hour later he announced he’d done it. I cursed a little and hurled a little abuse at him on instant messenger and redoubled my efforts… and started Think(c)ing a bit more. 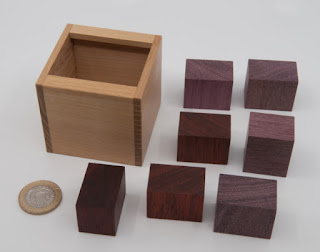 And that it turned out was the key. I’d spent several weeks playing with the pieces and slowly learning the combinations that did and didn’t work in particular orientations, but I’d been playing and not really analysing or thinking about things. Switching into proper puzzle solving mode really changed things.

I’d had a pretty good idea of how I thought things needed to go together, but I was still playing with other variations – so now I focused on eliminating the other alternatives – and that seemed to be successful – and so having reduced the possible solution set down to a single case, the only thing left to do was work out what the orientation needed to be, and how the heck to get the pieces in there in that orientation.

From there I switched to another helpful thought experiment that assumes you’ve got it solved – and considers which pieces can you take out – and then it’s just a case of building the bit that’s left behind, somehow… and that’s still non-trivial, but having broken it down that far, it’s at least a tractable problem for second-rate solver like me.

Getting to that stage took we several weeks – but once I’d grudgingly engaged the little grey cells, it didn’t take long at all to find the elusive solution  - and that’s why I rather like this puzzle – you can use deduction and logic to home in on the solution – as long as you’re prepared to Think(c)!