I first came across Rainer Popp’s puzzle locks through Grand Illusions – they looked good and solid and sounded like they made pretty good puzzles ... once I’d bought one of them (a T2), I’ve kind of had to buy each one that Rainer’s made since then, unfortunately I wasn’t one of the lucky folks who managed to get hold of the very first lock Rainer made (T1) – by all accounts a legendary puzzle lock that won’t be made ever again because it was simply too complicated! (If anyone ever needed any more of a reason to want to try and get hold of one after hearing that, then I haven’t heard of it!)
From what I’ve read, Rainer uses a friend’s machine shop after hours to make his wares, so his production runs will be reasonably modest, however they’re all being precision-made by a bloke who understands not only good puzzles, but also how to craft them from lumps of metal – they’re not only really unusual good-looking locks, but they’re excellent puzzles as well! 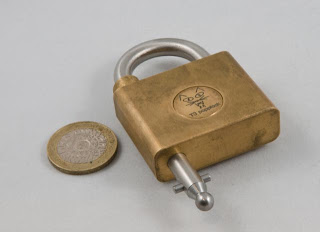 So far my collection of Popplocks runs from T2 to T5 – each one is totally unique both in terms of mechanism and in terms of looks – and this one, T3, is my favourite.  It’s a simple puzzle that stands on its own and will hold its own against most comers.
It looks a little unusual for a padlock, not least because it doesn’t appear to have a key or a slot for one – it does have a disk shaped piece in the middle of the lock that you can push, pull and rotate, sometimes ... the hasp seems to be a very solid chunk of steel that projects through one side of the lock itself – with a small locking bar along the bottom to (presumably) stop it from coming all the way out when the lock is opened ... so far so good ... 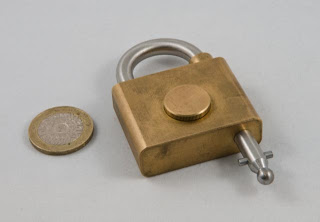 Right, so start playing around with it and work out why sometimes you can turn that dial, and sometimes you can’t, and what that means to you – then enjoy the brick wall that Rainer throws at you for quite some time until you notice something so subtle it’s almost criminal!
Remember I said that these things were precision- made? That little step in there is just so well disguised that it’ll keep most puzzlers locked out for days ... release the doo-hickey and the lock Popps open :-) – in total there are probably only two or three real ‘moves’ to opening a T3, but I guarantee it’ll amuse you for quite some time trying to find what you need to do ... masterfully hidden, clever design, lovely puzzle! 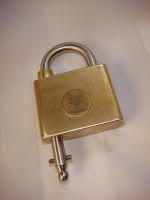