A long time ago in a distant galaxy, at an actual MPP gathering, a young puzzle designer surreptitiously asked one or two people whether they thought his puzzle lock was any good. Each of them retreated to a distant part of the hall and tried their luck on it… I think they all succeeded and every single one of them pronounced the same verdict, albeit in slightly different flavours: “It is excellent!” “You must make them!” and ”Take my money now.”

Yes, we were quite encouraging… and then a few months of virus-y-lock-down later Andrew got back in touch having set up a website and having produced the first few locks, asking if I still wanted a copy – I suspect the PayPal landed in his account shortly before he saw the read-receipt from his email bounce back (I might have made that bit up, but you get the idea!) – a couple of days later the Royal Mail delivered a handsome embossed velvet bag with Andrews ‘ac’ logo on it in gold neatly cushioning a healthy sized ABUS padlock and a pair of keys.

So what’s the first thing you do when you get a new puzzle lock with a pair of keys? Check they’re actually the same keys, or insert and turn hoping the lock will magically open? Either way, you won’t be disappointed… in fact at this point, he might as well have given you a stick of celery for all those keys are worth! You’d stand a better chance opening the lock with the latter…. Those keys do nothing… got it?!

OK, examine the lock carefully for signs of tampering – there’s a serial number, the ‘ac’ logo and that’s it – the usual lubrication holes – slightly too small to insert a digit into (don’t be tempted!). Nothing else interesting rears its head…

Take my word for it, this one is pretty darned unusual – I’ve played with quite a few puzzle locks and I’ve never seen one anything like this before – the “A-Ha!” is wonderful – very rewarding.

Andrew, it is excellent. I’m very glad you made them so that more people can enjoy them, and I’m glad you took my money so that I have one in my humble collection… TOP JOB! 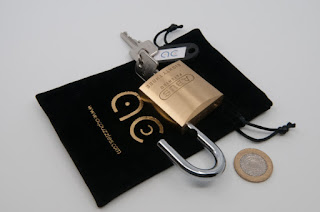 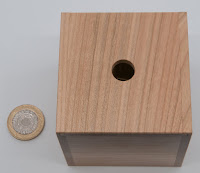 (Yet) Another slightly evil puzzle from Volker Latussek… and the lads at Pelikan.

Eight wonky cuboids arrive neatly stacked inside this little box with a handy sliding lid (which has a hole in the centre) – slide the lid off and you’ll see that the wonky blocks more or less fill the space – and at this point it’s not all that obvious that they’re pretty wonky… so you tip them out and notice a couple of things at about the same time: they really are wonky blocks and there’s probably an immediate pang of regret at the foolishness of simply tipping them out and not paying an awful lot of attention to how they were arranged in there. Oh, and there’s a second hole in the bottom of the box…

It begins to dawn on you that your mission, for you must accept it now that the wonky blocks are spread out on your desk, is to replace the blocks inside the box so that when you close the lid, you have a clear sight line through the centre of the box and out the other side. 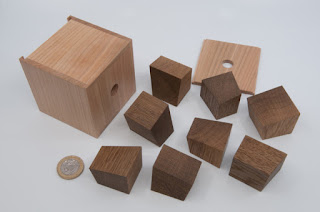 Playing around with the blocks shows you just how funky they are – sure there are some square corners, but most of them seem rather inaccurately cut – I jest, of course! These darn things have been perfectly crafted so that they only allow you to do things properly…

I found it a really fun little ten-minute challenge – it relies on some thought – always a good thing for an interesting puzzle, and then, once you’ve decided on a strategy, it doesn’t take long to whittle down the possibilities and blast through the various arrangements to find a very neat arrangement that gives you a neat little shaft of nothingness right through the centre of the box.

Amusingly, it took me almost as long to replace the pieces pack in an unsolved state!
Posted by allard at 17:46 1 comment: 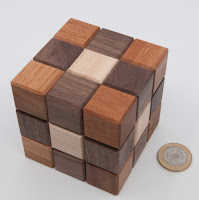 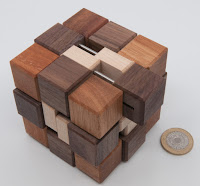 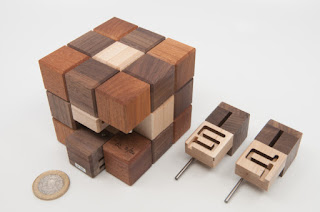