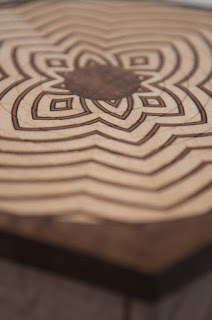 Part, the third, in the Lotus-Trilogy announced several years ago by Kagen Sound arrived in Barnt Green recently. This time the wonderfully sturdy round shipping box came with not just the usual plastic cushioning wrapped around the box nestling inside – it was additionally cushioned by six comically large wood shavings, as though Kagen had been fine-tuning his kanna while he was packing up these beauties.

I’ve described my encounters with the first two puzzle boxes in the series over here and here – in short, I found them absolutely delightful – they had a lovely rhythm of trying to work out what pattern you should be striving for, trying to get the pattern to work, completely, opening a drawer and then repeating the process until you’d opened all four drawers around the hexagonal boxes. Each one started with a visual clue to the first pattern and as you progressed, each drawer would somehow provide the clue to the next pattern… both of them presented a lovely little journey and a nice sense of achievement.

The third one in the series – the Butterfly Box - builds on that progression in about the same way as the Burj Khalifa builds on the mud hut. Ostensibly it looks just like the other two (OK, I realise my Burj comparison just fell flat!) with some subtle changes to the wood varieties on the main parts, but the main features maintain the strong family resemblance: the pair of drawers feel the same, the rings on the top of the box seem to handle themselves like the previous two and generate similar sorts of patterns – you might even be tempted to think that once you’ve done the previous two, this one won’t pose a huge challenge.

That would be a large mistake. 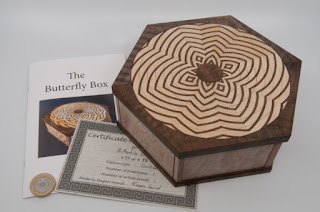 This one is the proverbial wolf-in-sheep’s-clothing – don’t be fooled – this is not a simple little exercise in making pretty patterns, even though they are VERY pretty patterns! This is a proper puzzler’s puzzle!

From the get-go in this one you realise that things are going to be different: on the previous two you always had somewhere to start… this one gives you literally nae clue! You’ll need to cast your mind back to Kagen’s original premise of a series of puzzles where the first two helped you solve the third one…

Knowing this, I duly set about re-solving the previous two in the series in order to jog my memory a little, and to try and find the way in to this final box – and that was a good idea, not just to remind myself of the mechanics and the approach to completing the patterns (often you’ll find that the "right" pattern isn’t possible given some of the rings won’t be able to get into the position that you really need them to be in) but there is also a beautifully disguised clue waiting there for you in plain sight, sort of… and that is the start that you need for the Butterfly Box. (It is beautifully hidden and I have to admit that in the past two years I hadn’t “seen” it until now.)

Diving into the Butterfly Box it won’t take you long to clock that this one is tougher – sometimes not all of the rings really want to play ball – and that can be problematic. Finding the clues for the successive drawers is a lot harder than on the previous two boxes – so several times I found myself retracing my steps literally back to the start again in the hopes of finding something different along the way. Sometimes I found myself totally stumped with no idea of where I should be heading next or no idea what the next pattern should be – word to the wise: there are stacks of very beautiful, wonderfully symmetric patterns that won’t open a drawer for you! Creating random pretty patterns may be a wonderful way to wile away the time, but it isn't a good puzzle-solving strategy! 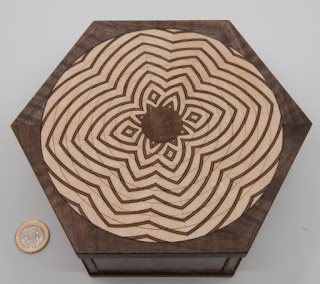 Find all four magic patterns and you’re ultimately rewarded with a little piece of paper with a URL on it that will transport you to a video of some of the making-of this stunning little trilogy. That video really blew my mind – seeing the amount of work that has gone into creating the sliding rings is truly gob-smacking, and some of the little details in the mechanics are wonderfully clever. (I love the use of wooden “springs”!)

And after all that, you find out that Kagen’s hidden something else in this box that you almost certainly haven’t found, so you need to go back through it and find it, don’t you? Only it’s so well-hidden that it took me several goes through the entire solution before I could finally say that I ‘d completed all of the challenges this box provides.

At the end of the day, the Butterfly Box is both a stunning work of art from a craftsman who really knows his stuff; and a memorable puzzler’s puzzle – there are 98 of them out in the wild – track one down and solve it, properly – it will make you feel good about yourself!