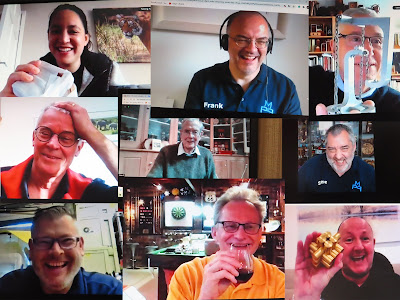 A couple of weeks ago we held our second virtual MPP and got to chat with our puzzling friends from (literally) across the globe again. We kept to the idea of running three two-hour sessions over the course of the day in order to make it a bit easier for our international friends to join in a couple of the sessions no matter where they were… and it seemed to work, although a couple of really hardened way-distant puzzlers made sure they were there for all three sessions – so we must be doing something right!

The morning session was a pretty laid-back affair as I’d totally failed to line up an exciting tour as the main attraction. Instead we literally just asked everyone on the Zoom call to tell us what they were currently puzzling on and what they thought of it… there were around 25 or 30 of us on the call and that ended up filling the morning session with plenty of chat, and I suspect that I wasn’t the only one taking note of some of the recommendations along the way!

I gave George Bell’s Chocolate Box a bit of a plug having received it the week before and really enjoying the solution to it… at first it seemed really fiddly and the round box had me chasing pieces around and around, until I had a bit of a Think (c) and then loved the solution. 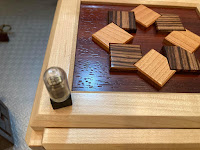 Dor’s recommendation was a binge-solve of virtually all of the Popplocks – which sounded like an excellent way to spend the better part of a weekend, and Nigel confessed to really enjoying working back over Kagen’s Lotus Box trilogy in order to really enjoy the latest arrival.

Ken teased us by showing a copy of Juno’s Puzzler’s Cage from Cubic Dissection still in its plastic wrapping – and after plenty of goading I think we managed to convince him to take the pieces out of the plastic wrapping - we did not succeed in goading him into actually solving it during the course of the day, however.

Jack showed us the new box he was working on – cue plenty puzzler’s lusting! Amy shamed the lot of us by showing that she’d been working on two high level Baumegger burrs, and a couple of folks told us they were working on Juno’s SDBBB:M – all with fat grins on their faces, as you’d expect. 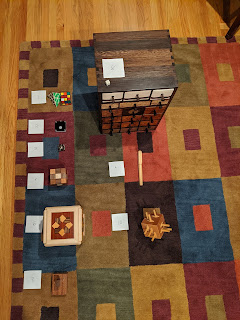 It was great seeing that Wil had managed to join us, although without a webcam or a mic, he was only able to lurk in the background – he did however grab some brilliant screenshots of the folks on the call and unwittingly provided some of the pics that found their way into this blog post – as I didn’t record any of the sessions and didn’t take any screenshots myself – so thanks for that, Wil! :-)

It was great having a chance to just chat about puzzles we were currently working on – a bit like we’d normally do at an MPP – only with our mates around the world, and if this doesn’t sound like total blasphemy, I wonder if there’s a place for these sorts of “get-togethers” even after we all get out of our various shades of lock-down?

At the end of the first session, we gave everyone a scavenger hunt list that included a bunch of things that would need explaining in the second session, including: a puzzle that makes you smile whenever you play with it, a puzzle you’ve crafted yourself, the smallest and largest puzzles in a single shot and a puzzle that you need some information on. During the break between the first two sessions folks posted their pictures on the MPP Facebook page.

During the first part of the second session, Big-Steve walked everyone through the entries received, inviting people to explain their entries and tell us some of the stories behind their particular choices, and then awarding random points for the various entries – which seemed to be based more on the amount of humour coming from the selections than for the selections themselves – but the audience seemed to approve and there weren’t any public lynching’s, which is always a good sign.

Frank looked like he had a really strong set of entries, starting with his awesome Kumiki Robot with a tiny Alan Boardman micro-burr perched on its shoulder… he seemed to be scoring unbelievably well too, until Steve decided to deduct WAY MORE points than he’d awarded on the grounds that Frank had actually already seen the scavenger hunt list earlier in the week when we’d been doing our preparations for the MPP! 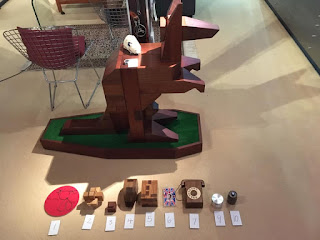 Brian put in a solid performance, totally acing the “puzzle you’ve crafted yourself” – come to think of it, he’d made most of the puzzles across all the categories in the first hunt – not many people could say that.

We worked our way through all of the entries before we handed over to Pantazis on the lovely Greek island of Kastellorizo for a tour of his puzzle museum. In spite of me managing to time our Greek island visit to coincide almost precisely with Pantazis’ renovation of the puzzle museum and the arrival of a multitude of crates consisting of three quarters of his puzzle collection, Pantazis still managed to do a sterling job of showing us around.

He’d spent the days immediately prior to the tour working tirelessly unpacking crates and crates of puzzles so that he’d be able to show us some of his favourite and rarest treasures – and he didn’t disappoint. His obvious love for puzzles in general, and for spreading a love for puzzling, shone strongly through all of his stories about his experiences of sharing the puzzles with folks on the island.

I loved the story of one of his mates tossing one of the puzzles into the harbour (don’t worry – it was shallow enough to save it!) in disgust when he found out that the puzzle he’d been trying to solve for absolute ages, had been solved in minutes by a blind friend of theirs. (Reminds me of a fearsome puzzler I know…)

Pantazis’ whole mission in life seems to be to share these wonderful puzzles with as many people as possible – puzzles should be played – and if that means that they occasionally need some repairs, then so be it. 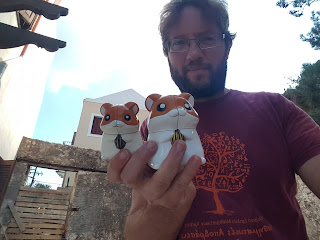 There were plenty of questions and even a little dose of maths, as you might expect, in the form of some interesting results on his analysis of the ancient Stomachion Puzzle.

With the light fading and the electrics not yet quite finished due to the renovations, Pantazis was absolutely undeterred and fired up the torch to continue the tour on the ground level – it really was lovely to see around Pantazis’ Puzzle Museum – THANKS PANTAZIS!!  (And bonus points for managing to find a rare pair of hamster twisties and posting a pic on the MPP Facebook group a couple of days later – our memes salute you sir!)

At the end of the second session we posted another scavenger hunt with similar levels of “interpretation” required – although nothing could quite prepare us for Shane’s entry this time around. At the first VMPP Shane had managed to score negative points for posting a picture of a dirty sock as one of his entries (fair scoring, right?!) – this time he posted a split keyring as his entry for all ten topics – although in fairness his justification for some of the topics was pretty funny. I’m not sure the judge was that impressed though!

Once again Steve did an awesome job of walking the various entrants through their selections and coaxing them into telling us some of the stories behind their choices – I love hearing puzzlers talking about the puzzles that are important or particularly interesting to them.

After walking through all the entries we headed into Frank’s Pu(b)zzle quiz hosted through an online app that handled all the scoring for us (to avoid any more unfortunate incidents of bribery)… a couple of us had play-tested the quiz during the week and we still managed to get a few good belly-laughs at some of the questions. 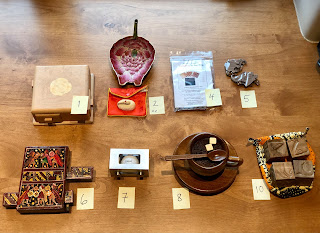 For some reason there were a lot of questions about cheese, but not many questions about train stations. Puzzles did feature in some of the questions and there was the obligatory trick question to check whether people had taken the trouble to read all of the instructions before the quiz began. (I think we managed to catch the actual Nick out with that one for the second time in a week!)

At the end of the quiz, I think Michel came out on top of the leader board – I’m sure someone will remind me if I’m wrong! To be honest, it was a lot less about who won and a lot more about the fun that we managed to have along the way… and that was there in spades.

I reckon we might need to have to do another one of these… they’re fun.