When Wil Strijbos told me he had included an extra puzzle in my last order and he was interested in my thoughts on it, I was intrigued and my curiosity piqued more than a little. He mentioned it was a collector’s wire puzzle from Jan Sturm and I have to admit to being a little less curious at that point – and I know that makes me sound like either a spoilt brat or a jerk, but I’ve never been all that attracted to wire puzzles. All the ones I’d come across up to now were more or less variations on a theme (bent nails or oddly-shaped loops apparently intertwined) so I‘d modulated my hopes down a few degrees by the time the package arrived. 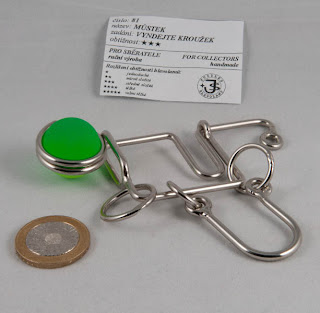 Turns out I shouldn’t have – this was no ordinary wire puzzle made of bent bits of wire in strange shapes – this was almost a little bit of art. Yes, mechanically it resembles a couple of similar puzzles I've come across, but the presentation is quite different. The finish on each piece is meticulous – the ends are all soldered and carefully finished and smoothed off or rounded. He’s captured a rubber ball in the end of the centre-piece to form a rather useful handle and add a neat little bit of colour into the puzzle – he didn’t have to do that ... the other end of the centre-piece has a small ring welded to it, giving it a neat, nicely finished appearance and stops anything from snagging on the end of the piece.
A quick look at the pictures shows that you have a central piece with a horseshoe hanging off it. There’s a ring threaded on that horseshoe, trapped behind another horseshoe device attached to the first one – get the ring off (and replace). Simple?
With these sorts of puzzles, I find the best approach is to establish what you can do and then whittle that down to what looks useful and work from there ... this will have you moving things around a bit and then ultimately with a little bit of inspiration, have you removing the ring ... now I’ve already nailed my colours to the mast on this class of puzzles, but I found myself having a nice little “A-Ha” moment when I realised that I had actually done all the hard work, and still hadn’t recognised how I was  going to simply remove the ring – and for that reason, I found myself rather liking this little puzzle – you can literally be just one tiny step away from victory, and not realise it at all ... 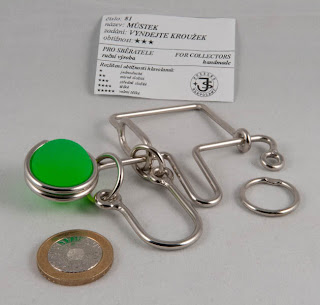 Judging by the packaging, this is part of a set from Jan Sturm (it looks like this one might be called Mystic and be #81 in a series of puzzles) and I’m certain that if you’re interested, Wil will be more than pleased to tell you more about them and what’s available in the series.
Thanks Wil – it’s helped to remove a preconception I had about wire puzzles.
[Just in case you’re puzzled by the title – I’m currently on a boat in the Med – today we’re on the Dalmatian coast ...  dovidenja.]
Posted by allard at 19:25