Sandfield’s Banded Dovetails was Robert Sandfield’s IPP Exchange puzzle in either 2008 or 2009  – it comes in a grey drawstring pouch announcing it as “Sandfield’s Banded Dovetail Puzzle / IPP29 – San Francisco / 28th International Puzzle Party, Prague 2008”  – and I’m guessing there’s a good story in there, but afraid I can’t find anything about it in my research on the inter-web. (But maybe someone will drop by and clue us in...?)
Brian Pletcher has written about his experiences with the Banded Dovetails over here. 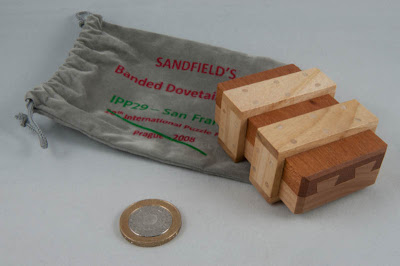 The Banded Dovetails continue the Sandfields’ association with tricked-out dovetail joints. Over the years they’ve given the puzzling world some rather impossible looking dovetail joints and used them to disguise some sneaky tricks.  Rob Stegmann has a brilliant collection of Sandfield puzzles over here – take a look for yourself.
This particular puzzle has a pair of contrasting coloured boards joined by a set of beautifully made dovetails which appear to run the length of the boards. These boards are then surrounded by a pair of wooden bands that seem to be pinned to the boards themselves. All this pinning and the joints themselves give the impression of a rather well-secured little object, which invites you to find, and open, the hidden compartment. 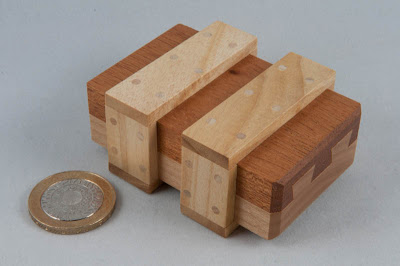 Prodding and pushing the various bits leave you with the distinct impression that actually the makers are having a bit of a laugh and they’ve in fact glued everything together and there is no hidden compartment at all – except there’s an odd little rattle inside there somewhere…
Suffice it to say that “the usual” attempts don’t yield an awful lot, but when you do find the solution, it will put a grin on your face.
Kathleen Malcolmson has done a tremendous job of building this little illusion and then hiding its secrets from even the very closest of inspections – beautiful workmanship and incredible attention to detail.
Posted by allard at 18:40