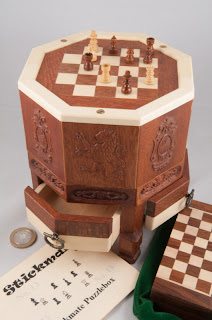 Back in November last year I wrote about my visit to Wil Strijbos’ place just before the Dutch Cube Day in Eindhoven, and I mentioned that Wil had blown my mind when he waltzed into the kitchen with a copy of a Stickman Checkmate Box – blown my mind because this was the puzzle that I’d most lusted after. Ever. Bar none.


But that was actually only half of the story – and now I can tell you the other half, but let me take a small step back first…
The first time I can remember seeing Stickman boxes was when I was trawling through the puzzle gallery on Cubic Dissection a few years ago. They all pretty much grabbed my imagination, but the one that really stood out, so much so that I actually dragged Gill over to show her some pictures of it, was the Checkmate Box. The description of a hidden mechanism moving the pieces to unlock a box sounded almost like the Mechanical Turk of yore – and seeing one made entirely of wood – including all the gears and internal mechanisms just totally fried my brain. Sadly however, Rob had only made 26 of them back in 2007 and they were all long gone! When they were first put on the market, their price was reasonable given the amount of work that must have gone into making them, and since then they’ve changed hands for increasingly larger and larger amounts on the usual puzzle auctions.
I’d watched a couple of them drift past the price I thought I could afford to pay for them only to resolve to keep an eye out for the next one each time… 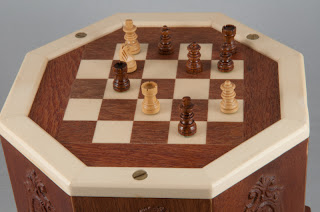 Flash forward to Wil’s kitchen where I’m standing playing with the Stickman #2 Box and he walks in with a Checkmate Box – and it’s absolutely gorgeous. When I regain the power of speech, I tell him some of this background and the fact that this is the absolute pinnacle of puzzle boxes as far as I’m concerned … and in that earlier post I said he’d blown my mind, but I didn’t quite get to the really mind-blowing part: Wil looks at me and says he has a spare copy – disappears for a minute and returns with a large cardboard box, still sealed, addressed to William Strijbos from one Robert Yarger … it seems he’d decided to buy two of them in case a collector wanted one.
He asks me if I’d like it, and the only thing that stops me from saying “Absolutely!! Yes, please!!” is the thought that he could get thousands for this if he put it on the right auction – so I give it a cautious “Sure I’d love it but how much would you like for it” – he wants what he paid for it … which leaves me totally conflicted! I don’t have that much lying around to spend on a single puzzle – and won’t until my bonus gets paid - in six months time and I know he can get several times that on an auction (I might have mentioned that a few times to him as well!). So I explain my situation to him and he says in that case “You take it now, and pay me later”(!). But I can’t do that to him, so we agree that he’ll hang onto it until I have the cash spare, and then he’ll ship it over to me. 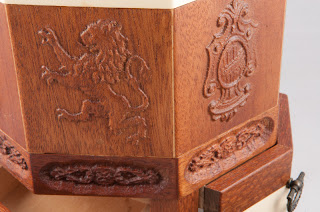 Six months later I send Wil some money and he ships the box over – in the interim I’ve watched Rob Yarger facilitate an auction of a complete collection of Stickmen and the Checkmate box goes for a very pretty penny! So before I send Wil the money, I check that he’s still happy with the price and tell him that I think he’s undercharging me for this work of art – but he won’t hear of it – the original price stands.
Sadly at this point the Post Office gets in the way a bit and the tracking shows the parcel in the UK, but not being delivered, for a couple of weeks – during which time the Dutch post office tells Wil there’s a problem with the address. There isn’t. 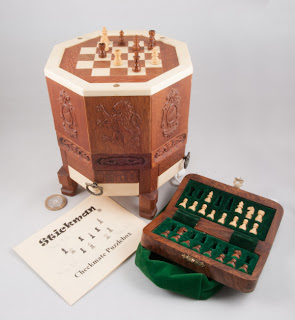 I worry a little bit that after all this time the Post Office is going to do something silly and the little treasure chest is going to disappear into a black hole somewhere… but about 4 weeks later it turns up back at Wil’s place, seemingly none the worse for wear, with a note saying there was no-one home – which is odd because there wasn’t ever a note through the door… but the parcel is safe.
Wil posts it back a couple of weeks later, when he’s in town and I’m not on holiday – and this time it gets to my house in a couple of days. At this stage I’m pretty excited and cut open the packaging with my trusty Swann-Morton #4, only to find that the trips back and forwards have taken a toll on the box, which is now in more pieces than it really ought to be – nothing’s broken, just come apart at the glue seams – and I’m hovering somewhere between agony and ecstasy and not sure where to settle – I finally have the box I’ve wanted for years, except it’s in bits in my hands (OK, just 5 bits). 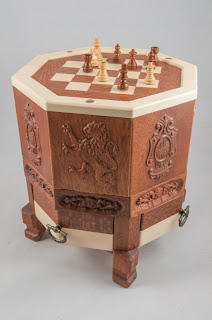 I jot off a quick email to Wil to let him know what’s happened and he immediately offers to bring his copy along when he comes over, we’ll swap, and he’ll get the other one repaired … what a gentleman! I decline, because I’d already been in touch with Robert Yarger and described what had happened and how it looked to the untrained eye – and he’d responded right away with three long emails containing detailed photographs and instructions on exactly what to do to put it all back together again – another absolute gent!
From the email exchange with Rob, it transpired he’d hedged his bets a bit on the final assembly of these boxes, thinking that the complexity of the innards might mean he’d need to get back in there at some point in the future if anything went wrong, so he’d deliberately made the final assembly joint a fairly weak glue joint – and that was what had given way while my box was in transit … and exactly the same thing had happened to another one – ironically, the only thing he’s ever had to think about putting back together on these mechanical marvels has been the weak joint he introduced in case he had to get back inside. They can take quite a beating, but it seems the Post Office is far more ‘enthusiastic’ than most puzzlers! 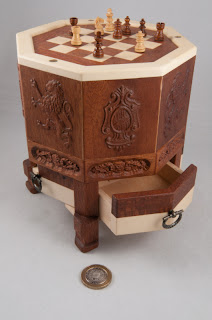 Sod’s Law then dictates that I don’t have enough spare time to get it all back together again before Wil’s visit / MPP6 – but the extra two days over the past long weekend gave me enough time to work through Rob’s emails methodically, test that I had everything working properly, commit to glueing (commitment is always the hardest part, I find) and then tie it all up while the glue dries.
The grin was pretty broad when I untied it the next evening and it all held, and the drawers all move the way they should – and it looks absolutely stunning once more.
Given the process I’ve been through, I didn’t really get to solve the puzzle – but the mechanics are every bit as impressive as I’d imagined they were. Playing with twisting the box backwards and forwards and seeing the pieces move, properly, is quite something! Coming up with a pair of Checkmate positions, one for either side, from the same starting position, using those internal wooden(!) mechanics, is staggering – quite literally.
This one has a very special place in my collection, not just because it is a mechanical marvel that shows off some incredible engineering and craftsmanship, but because of the story of how it came to be in my collection.
Thanks Rob for the advice, instructions and encouragement,
…and Thank you Wil – I think I will be in your debt for quite some time. 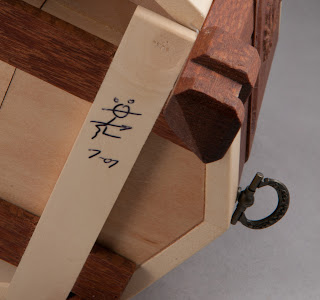