Two weeks ago today I found myself on a plane across to Schiphol and after retrieving my luggage (yes I was only going for a couple of days but I'd taken some puzzley-things I'd rather not have had in my hand luggage) and heading toward the train station I discovered that some planned engineering works and some not-so-planned signal failures were playing a little havoc with the usually great Dutch rail service. I worked out more or less what I thought I should do and texted a friend, just to be sure... and he ended up giving me a running commentary on which trains to look for where, as my normally simple journey to Eindhoven became more and more complicated... 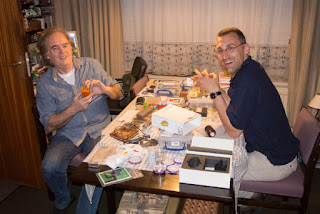 When I got off the train in Eindhoven my personal rail-re-router met me at the platform and after checking into the hotel and ditching the stuff I didn't need we headed off to Louis' place for a little light puzzling, some chat, a little playing with the kids (in fairness, Louis and Mieke picked up all of the required football training) and some really delicious dinner!

Louis and I spent a while looking over the latest prototypes for my Exchange puzzle (Yip!) and once again he amazed me with his eye for detail on the different experimental variants he'd tried and the reasoning behind some of the latest changes. Expecting a long day on the Sunday, I retired to my hotel fairly early that night... and Louis collected me bright and early the next morning for the short drive out to Wil's place in Venlo.

The traffic was really light so we ended up getting there earlier than we'd intended to and found ourselves being greeted like long lost friends. Wil gave us some coffee and offered us an amazing array of cakes and tarts, and we did a little catching up before the rest of the puzzling world arrived.

Over the course of the next hour or two there was a steady stream of folks arriving - at first Wil would answer the doorbell himself, but soon that became a bit difficult as his house rapidly filled up with puzzlers either chatting or raking through his hundreds of plastic crates - so in the end whoever happened to be nearest the front door just let the latest arrivals in and made them feel welcome.

I was chuffed to see Michel van Ipenburg in the flesh after reading his puzzling newsletters about all his latest acquisitions and seeing him on Facebook - and as Goetz Schwandtner pointed out, I'd actually seen Michel at the last DCD when we were chatting about Goetz' Fidgety Rabbits (only in a puzzle blog would that sound entirely sensible...) but I was being a bit dense and hadn't put two and two together that day. Later on in the day, Michel was wandering around and dishing out copies of Stressful that he'd made up in really small colourful binder clips to pretty much everyone who was there ... thanks Michel! It's going to live next to my somewhat less colourful and rather obese looking ones. :-) 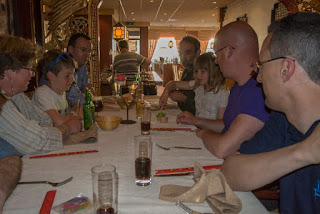 I must have spent hours trawling through Wil's plastic crates finding some absolute gems from IPPs-past - stopping occasionally to try and solve something -sometimes succeeding, more often than not putting it back the way I'd found it and hoping that nobody had noticed my failure!

Some puzzlers had brought along some of their designs to sell and I ended up spending a lovely time chatting to Ton Delsing about some of his sliding tile puzzles. He took great pleasure in showing me some of the tricks and constraints that he'd built into some of his puzzles and kept encouraging me to have a bash at some of them. I bought a couple of them ["Sliding Puzzles" - it seemed appropriate! and "Cat & Dog" which Ton told me was a tough puzzle] and I've had a little play with one of them since then and scrambled Cat & Dog ... and no amount of fiddling since then will return it to any of the target orders - I may need to spend a little time thinking about this one ... or perhaps taking it away on holiday with me!

Louis and I had a chat with Peter Knoppers [of Buttonius-fame] who'd done the laser-cutting for my Exchange puzzle about the latest variations and then we worked through half of the solution to make sure that everything fitted properly - and it did - beautifully - so we asked Peter to let rip on the rest of them. 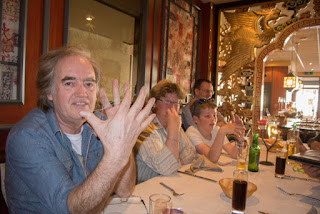 Peter had also brought along a couple of puzzles that I'd ordered off his web-site including a copy of Oskar's EGGcentric, his own Di-Half-Hexes from IPP32 and a Crazy Elephant Dance Kit.

Somewhere around lunchtime a huge feast appeared in Wil's kitchen and folks helped themselves to an vast array of incredibly yummy-looking food. I'd piled up a plate and wandered outside into the sun (yip, I did venture outside in spite of all the puzzle-goodness inside!) where I found some puzzlers I hadn't met yet with some I had - having a great time chatting and munching and occasionally fiddling with the odd puzzle as well. I found myself feeling a little guilty as there really was a United Nations of puzzlers there that day, happily chatting away in Dutch, German and occasionally English - but whenever I happened to open my mouth, the conversation would invariably switch to English and carry on, having included me - puzzlers are a really inclusive bunch!

After lunch I had a spotted a Binary Burr (or was it a Ternary Burr?) on one of Wil's shelves and seen that there was a piece sticking out... my OCD kicked in and I was unable to leave it in that condition so I picked it up and began playing with it. Very quickly I realised that it wasn't one of the early moves that had extended it so I ended up wandering up and down aimlessly through the sequence of moves not really getting very close to restoring it back to its brick-like shape. While I was doing that, Goetz-master-of-all-puzzles-n-ary wandered in so I did the obvious thing and gave it to him and asked him to take it back to the starting position. He took it and sized it up much as a twisty-puzzle-solver would give a scrambled cube the once-over and then proceeded to whizz through a bunch of moves with jaw-dropping dexterity that had it back to the starting position in about a minute. OCD satisfied, we replaced it on the shelf... 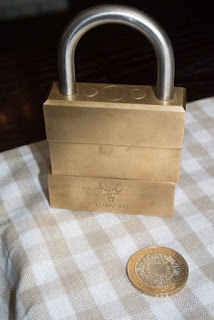 Later in the afternoon I set myself a bit of project and picked up Wil's copy of the Popplock T1. I'm a big fan of Rainer Popp's puzzle locks and the T1 seems to have attained an almost legendary status - not just because it's virtually impossible to find one, but also because it's a really tough puzzle. Knowing that Louis had recently opened it, I knew I could get some help if I needed it so I sat myself down and began fiddling... the T1 is a really solid-looking lock and the haps seems to be sprung and travels all the way through the body, peeking out the bottom when you compress it. A careful examination shows a few "interesting" markings / buttons around the body, but at this point nothing really moves. I spent a little while on it before discovering the first set of moves and I have to say that they totally blew my mind - I just wasn't expecting this thing to do THAT! There was the vaguest of clues to the eventual move just before it went, but nothing to suggest what was about to happen... Having made some progress, I was then pretty stumped as to where to go next - there was a world of new things to try, none of them seemed to really do anything though... so I wandered upstairs and found Louis and asked for some pointers - which he duly provided and after a couple of false starts we had it open ... and it really is EPIC!

Later in the afternoon Wil was dishing out some laser-cut assemblies he'd brought back from his latest trip to Japan to everyone who was still there... I know there's a Cherry dodecahedron and a Clover dodecahedron in there, but I still have no idea what the set of triangular pieces is going to turn into. (Louis has subsequently assembled his copy and pronounced himself surprised at the eventual shape - so I have NO IDEA!)

That evening Wil took the Van Grol-clan, Rob, Louis, Chris and I out to dinner at his local Chinese restaurant where they treated us to some wonderful delicacies all served in great big platters so we could all try everything. Wil entertained old and young alike with puzzles and magic and we had a terrific meal. After the meal, the manager ushered a pair of us into a storeroom to pick up a couple of large boxes that clinked a lot when we picked them up... :-) 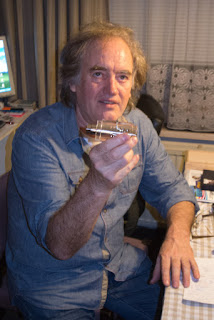 Back at Wil's place we puzzled even more, with Louis obliging and opening Wil's Bronze Revomaze for him so that he could display it in the lovely clear sleeve that Neil had made for him. Judging by Wil's reaction he was over the moon with the new clear sleeve and promptly gave it pride of place in one of his special cabinets.

Somewhere after 11pm we called it a day and after dropping Chris at the station, we headed back toward Eindhoven with stacks of new puzzle-related stories buzzing around in our heads. Next morning I did battle once more with trains (signal failures again), planes and automobiles to get myself home - a really fantastic puzzling weekend thanks to Louis, Wil and all the folks who helped make Wil's last Queen's Day Puzzle Party for a while such a wonderful day. [Queen Bea's abdication means next year it's a King's Day PP!]
Posted by allard at 12:52