Jane Kostick entered three designs in last year's Nob Yoshigahara Puzzle Design Competition and I've already written about two of them over here. I hadn't bought a copy of the third, Double Duals, at the time, but recently I managed to remedy that. 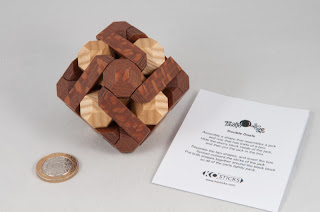 I'd been trawling through John and Jane's website just in case there was anything new when I stumbled across a couple of interesting new things (you can see a sneak peek of one of them below) so I shot off an email to Jane to ask about some of the new designs. Her reply was the usual mine of wonderful information about the designs and how they came about, but unfortunately she went on to describe how she was in the process of moving out of the building that had been home to her woodshop for quite some time, as the owner intended re-purposing and developing the building. The upside was that she and John were in the process of building a purpose-built woodshop (and star-factory?) in their backyard - complete with an awesome looking wooden cupola - the downside was that the woodshop was currently out of commission, so she couldn't make me anything new ... however she did happen to have a couple of interesting things lying around looking for a good home ... and that's how I managed to snag a copy of Double Duals.

Double Duals is probably a bit more puzzle-y than some of her other designs and it comes with its own poem describing the goal:

Assemble a shape that resembles a jack
and one that has traits of a box.
Hide the ebony block inside of the jack,
and then put the jack in the box.

Separate the two shapes, and invert the box.
Spread outward the sticks of the jack.
Put both shapes together around the black block
so all of the parts tightly pack. 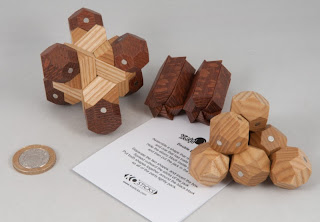 You get a set of 24 sticks and 15 blocks ... one of the blocks in a contrasting wood has no magnets and forms the centre of the eventual structure. One set of 6 blocks are used to form the corners of an octahedron whilst one half of the sticks and the second set of sticks will be combined with the other 8 blocks forming the corners of a cube... or rather, in terms of the instructions - form a Jack-shaped structure around the black block, and then a cube shaped structure around the Jack ... putting the Jack-in-the-box!

OK, first things first: when you start with a pile of bits and the poem, it's not exactly obvious how these things are going to go together and some experimentation is definitely called for. I found that starting with one of the blocks and a few sticks I could more or less work out how the ebony block might be cradled inside a Jack-shaped structure ... and then building on that you can add pieces until you start seeing gaps being left that happen to be just perfectly shaped and sized to accommodate the final few sticks, and you realise that the triangular sticks are all flush up against the ebony block on every side... 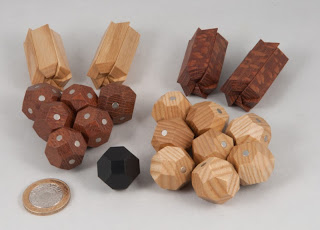 I still find building the cube-structure on its own isn't trivial - even after several goes at it - my brain wants to put the sticks on the edges of the cube and it simply won't work that way ... whereas building the cube on the outside of the Jack is a relative doddle as the Jack shows you where to put the blocks and then joining the blocks with the sticks is a relatively straight forward exercise.

I took my copy along to MPP11 and noticed a few of folks fiddling around with the pieces but only a couple of them actually managed to assemble the full structure properly starting from scratch - so perhaps it is a bit more puzzle-y than some of Jane's other designs after all... 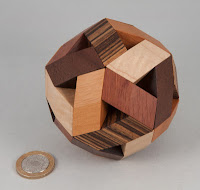 The thing that really caught my eye on Jane's website was a new design called Quintetra - take a look at the video and you'll see why I was so totally hooked on it. I loved the three layers of the construction that just all look so totally different, yet fit snugly inside one another... unfortunately, Jane only had a set of the outer pieces on hand and wasn't able to make up a set of the innards before her woodshop got temporarily packed up and placed in storage ... so I have the outer shell in the mean time and hopefully when the new woodshop is up and running she'll be able to make me a set of the inside layers ... and then I'll write about this one properly, but in the mean time, here are a couple of pics to pique your interest. 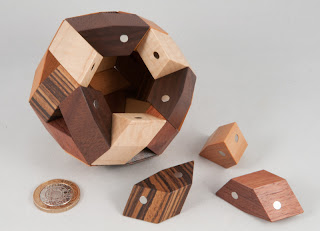