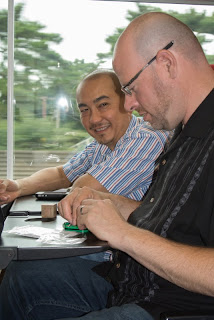 I had breakfast with the Rothstein brothers while chatting about Wil Strijbos' various puzzle designs, including the odd quick chat with one of the brothers while the other was off at the buffet picking up something else to eat so that we didn't end up tipping him off on a puzzle he hadn't solved yet... not that they're competitive at all! :-)

Having heard that there was a Karakuri Exhibition in one of the large Tokyo department stores, we'd mentioned to a few folks the day before that we were going to head into town in search of the exhibition, and by the time we left the hotel there was a gang of 7 of us.

We found the store fairly easily right next to the train station, however the store is spread over six rather large floors and we quickly realised that finding the exhibition inside the store was going to require some assistance. 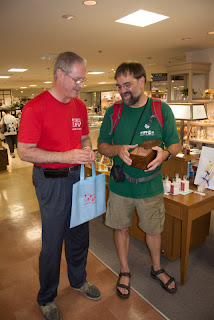 We found an information desk and using some limited English and lots of gesticulating we managed to convey what we were looking for, and after a bit of a wait while the incredibly helpful assistants looked up things in books and rang up their colleagues (some of which may have been related to our quest - but I'm not certain) they confirmed that the exhibition was on the sixth floor and showed us whereabouts it would be on the floor plan ... armed with that information we set off up to the sixth floor and began marching around the target area - 7 big westerners, mostly with backpacks or an IPP33 tote bag, wandering around the fine household goods section - I'm sure we didn't look suspect at all! 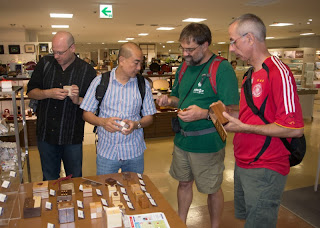 After a little exploring we found a table of assorted Karakuri puzzles for sale with a copy of each one out to be played with ... and after an initial bit of disappointment at the relatively small range, we had a play with each of the boxes on display with the ever-helpful shop assistants keen to help out when we couldn't open a particular puzzle or give us advice on which way north was... 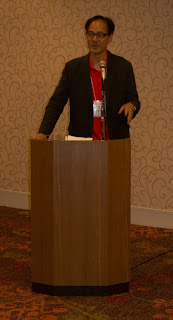 From there we headed off to a sushi bar that Wil remembered fondly, on our way to Tokyo Hands - the gadget store of note! The sushi bar was clearly a favourite with the locals and there were three fairly large (why is that!?!) chefs standing in the centre of the bar making up plates of sushi tirelessly and then feeding them onto the conveyor belt while patrons did their damnedest to stop the plates from having to suffer the ignominy of going a second lap. Every now and then a patron would request something specific and one of them would switch to making something different for a few minutes before returning to their well-oiled routine - damn fine grub, but don't ask me to try and find that sushi bar again... 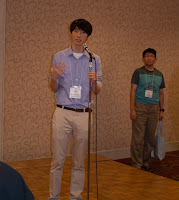 At Tokyo Hands we probably spent an hour or so wandering around and buying various knick-knacks, puzzles and even some decks of cards(!) before deciding that we probably needed to head back to the hotel for the formal start to the IPP proceedings that evening... we hadn't made it past the first floor yet - let alone experienced the Cat Cafe on the top floor - I'm going to have to go back for a longer look one of these days.

We got the express back to Narita and found yet more puzzlers had arrived, including fellow-Midlander Sam Cornwall. 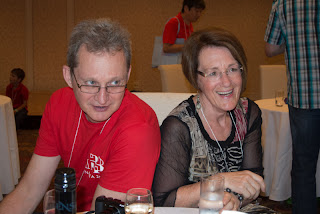 After a quick shower and a little email we all headed off to the Founder's Reception where the first-timers were all given the opportunity to introduce themselves and tell us about the puzzles they enjoyed ... a nice new touch, although how Jerry Loo managed to get himself missed out we'll never know...

The buffet was great and the banter after the speeches with Frank, Jo, Brian and Sue, John and Chinny was absolutely first rate! I hadn't laughed that much in ages. 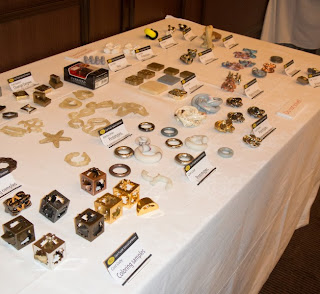 During the course of the evening several folks kept reminding me that I'd offered to put them up if they were ever in the neighbourhood and I suspect that if they were all to descend at once for any particular reason we might end up with a very full house! But hey, it'll be a good laugh...

We eventually got turfed out of the reception room so we pretty much all just migrated across the corridor to the Puzzle Design Competition room. 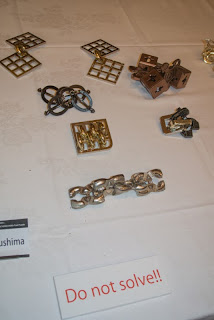 One entire wall of the puzzle room was dedicated to a display of Hanayama Cast Puzzles and not only were there Cast Puzzles in all shapes, sizes and colours, there were a bunch of prototypes and what's probably best described as a display of Cast Puzzle Abuse

... where some highly talented puzzlers (including one or two of the first timers who'd just introduced themselves earlier that evening) had combined a number of similar (and in some cases dissimilar!) familiar puzzles into seemingly impossible configurations ...I'd seen pics of a pairs of Cast Boxes being combined around a pair of rings - even seen one of my mates do that - but some of those constructions simply defied belief!  ... and the highlight: a sign next to these amazing constructions saying "Do not solve!!"

We wandered around from table to table playing with these great new puzzles
until midnight, when we got thrown out of there as well ...and I called it a day at that stage, knowing that the next day would be rather busy... [I'm a wimp, not like Rox!] 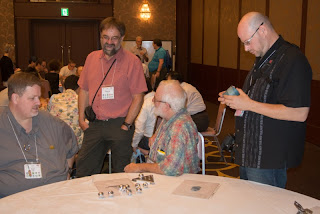