STOP PRESS - Robert Yarger - the Stickman himself - has
just created his own web-site over here... It has some
gorgeous pictures of every single one of his creations. 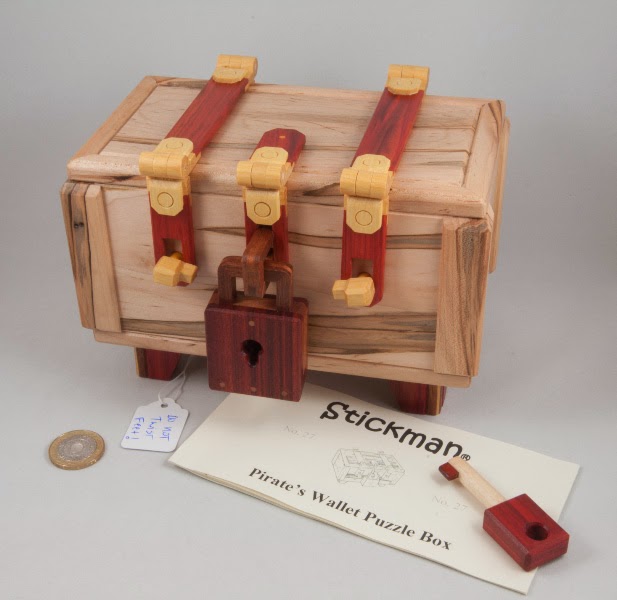 Sometimes the puzzling gods really smile on me … a couple of weeks back I had an email from the Stickman to say that I’d been chosen in a random lottery to be offered the chance to buy a copy of his latest creation – the Pirate’s Wallet. I duly logged into Paypal and did the necessary and then replied with a “Yes, please, sir!”

A couple of weeks later, I received the inevitable ransom demand to release said package from Customs and Gill sorted that out for me before I even knew it had arrived… and it was duly delivered the day before she left for a long weekend in France with some friends – so I had a weekend with a brand new Stickman, not many chores to do and it was tipping it down outside – so I’d just have to puzzle!

The Pirate’s Wallet, as you might expect is a little pirate’s chest, with a rather hefty padlock on the front of it… everything is made of wood on this box, from the straps keeping to lid closed to the hinges on those straps(!), the padlock on the front and even the key. (Actually, that’s not quite true, there are a couple of tiny magnets inside – not even Rob has worked out how to magnetise wood yet – although if someone could, I’d have my money on him!) 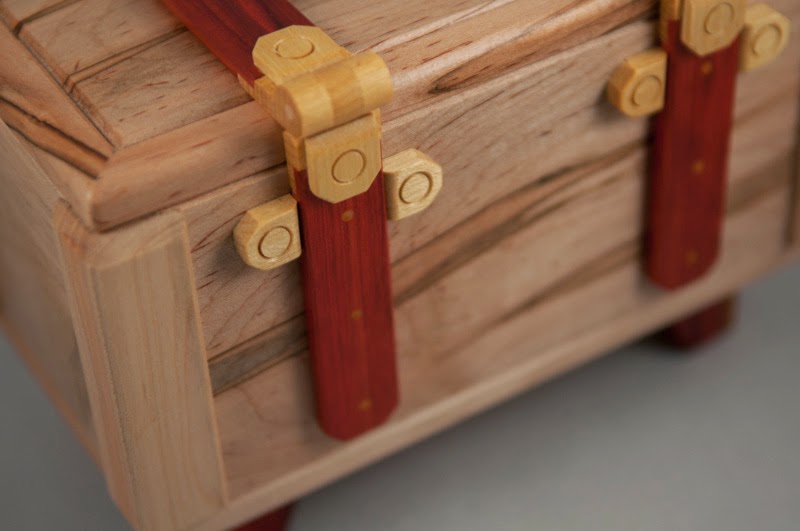 He’s chosen some absolutely gorgeous woods as usual – the grain on the ambrosia maple makes it look like a really old, well-loved chest and the redheart and yellowheart on the straps and hinges really stand out superbly.

The puzzle arrives with a little tag around one of the feet asking you politely not to twist the feet – you could probably force them with a bit of brute force and a lot of ignorance – best not to. Aside from that, it’s pretty much open season…

So, what’s to notice – first off, in case that wasn’t totally obvious already – it’s gorgeous!

OK – the little turn-buckles trapping the front parts of the straps can twiddle, although lining them up, doesn’t release the straps on the front as you might expect – they’ll wiggle a bit, but won’t come free, yet… exploring the straps a bit further, there doesn’t seem to be any give anywhere else on the straps, so we’re probably better off focusing on the front for now. 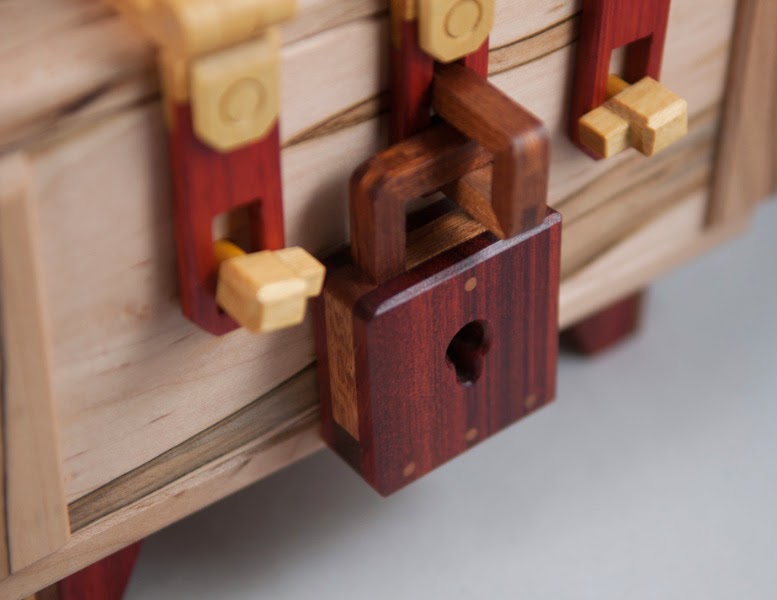 Might as well fiddle around with the lock a bit then – key goes in and turns all the way around, although apart from the occasional tightening, I can’t find anything interesting on there…

Experiment a bit on the box itself and find a little bit of evidence that some things might not be quite as permanently attached as you might expect – and a big grin appears on my ugly mug – Rob’s disguised some stuff in there rather brilliantly and I realise this box is not going to open the way it “should”! Classic Stickman!

…I’m going to gloss over the next several hours of joyous discovery on my Saturday morning but suffice it to say that I had several periods of intense discovery interspersed with a number of patches of Think©-ing. All told I probably spent about three hours getting into the inner sanctum – three hours of puzzling heaven! 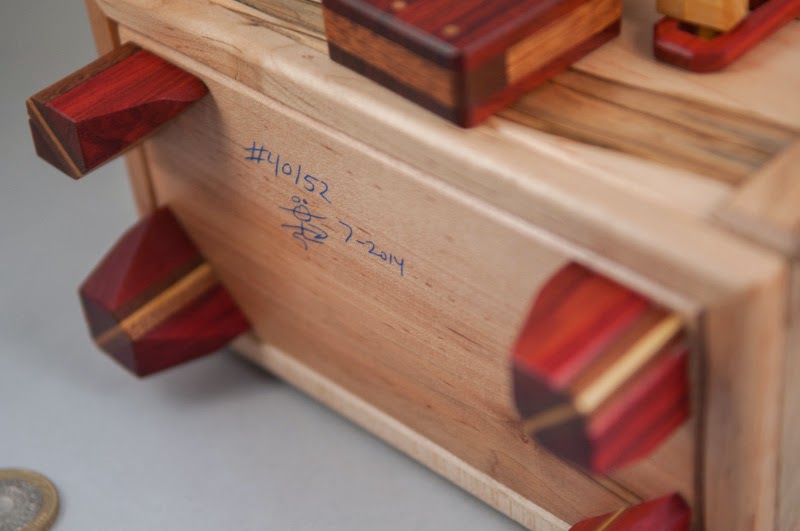 Rob’s created an awesome journey with his latest creation – it’s not surprising it’s taken him seven months to design and make a run of 52 copies… there’s a huge amount of clever design and fiendish engineering in there – and he’s left it all out on display, so when you open the box, you’re able to totally disassemble it and see how every little step works.

I should confess to a moment of sheer panic when I started disassembling it (well, you have to, don’t you?) – I’d removed a particular sub-assembly and turned it over to look at the back, only to realise that the mechanism on the front wasn’t trapped, when it fell into my lap in pieces… I’d only just glanced at it before that happened, but managed to get it all back together again. 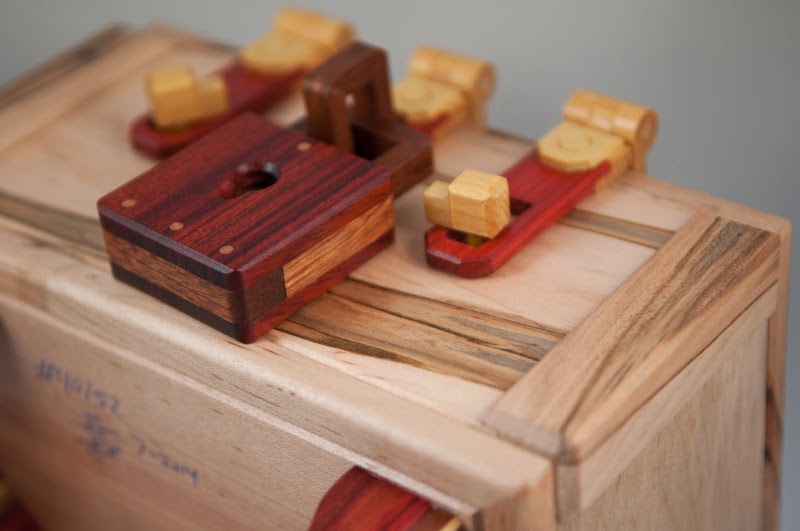 If you’ve read any of my past posts on Rob’s creations, you’ll know I’m a huge fan of his work … but this one is really exceptional – Rob describes it as of “moderate” difficulty – and that’s probably about right, although it’s definitely at the harder end of “moderate” rather than the simpler end. It’s a great puzzling journey as you wend your way through the path to the solution. You’ll find a variety of useful things to help you along the way and there’s always just enough of a clue to where to go next, if you’re paying close attention… and plenty of “A-Ha!” moments along the way.

It’s an EPIC experience – a little slice of puzzling heaven on a rainy weekend at home – Thanks Rob – you ought to be mighty proud of this one!
Posted by allard at 13:18