Mike Toulouzas makes some incredibly beautiful puzzles in a variety of glorious exotic woods… he tends to make them in reasonably small runs and as a result, they typically aren’t that cheap. Worth every penny in my humblest of opinions, but not cheap. So when Bernhard Schweitzer recently announced that would be stocking a collaboration between Mike and the New Pelikan Workshop, it sounded rather interesting. 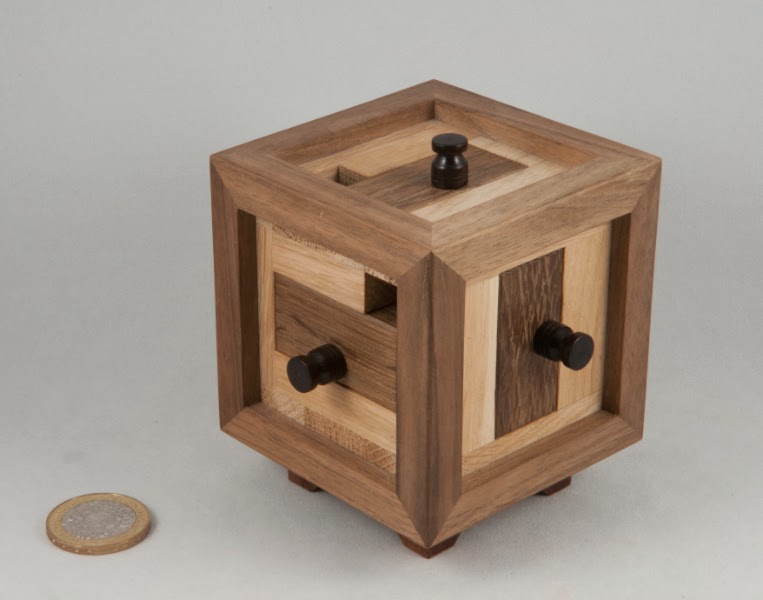 I asked Bernhard to reserve a copy for me and duly collected it at the puzzle party at IPP… and a while later I got to play with it.


Let’s start with how it looks: smashing! Mike has taken care of the finer detailing work (think feet and handles) and the Pelikan guys have taken care of the rest – so it looks stunning and the fit is top-notch … and the price is jolly reasonable – Bernhard’s definitely hit on a winner with this particular combination of skills.


Doors and Drawers is one of Mike’s early designs and broadly speaking you might be tempted to describe it as a framed three-piece burr… it might look like one, but if you treat it as one, you’ll take quite a long time to get anywhere on solving it! At first on of the drawers will slide out a bit and slide back in again… fun, but on its own, not all that useful.


Progress comes from realising that this isn’t merely a framed burr, it’s also part packing puzzle… [No that’s not a spoiler - it’s in the puzzle’s description!] This is a packing puzzle where there are some extra little pieces that need to be dealt with before you can make any progress whatsoever… find those pieces, and deal with them (carefully, since the tolerances are really fine and require some rather precise handling) and then you’re free to solve the framed burr part… 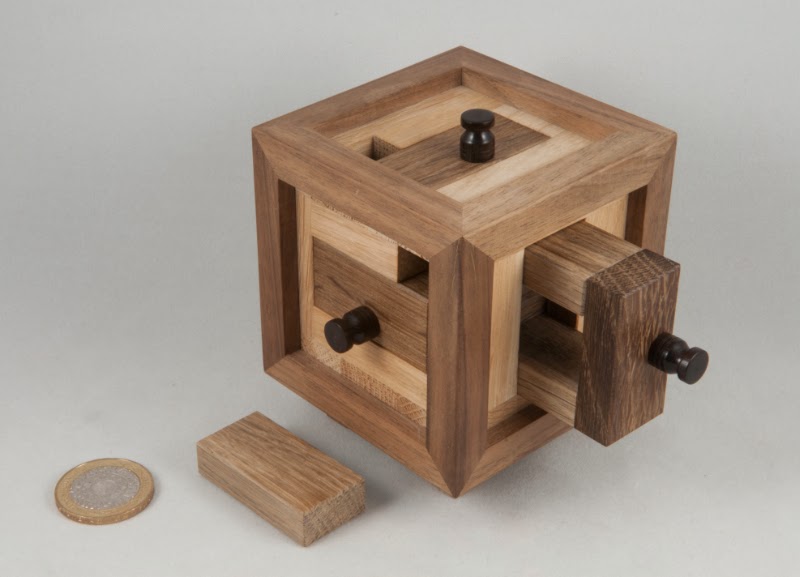 …and that’s the part with the high move-count… I managed to dispatch with the packing puzzle bits fairly readily, but found myself struggling over the course of several days with getting the doors and drawers themselves out of the frame. The key, as so often is the case was spotting some subtleties and making sure that they were all being used – time and time again I’d come reasonably close to getting a piece out, but then find myself right back where I started again.


I like the fact that it took me several goes at it over a couple of evenings before I finally managed to remove the next piece – something that made the sense of victory taste a little sweeter for the earning of it.


Reassembly is another serious challenge! Working out the eventual orientation is not a particularly big challenge… working out how to get them there through the 15-or-so moves is the real challenge. I must have got lucky on that bit because it didn’t take me nearly as long as the disassembly did… and slotting the final pieces of the puzzle into place rewards the puzzler with a neat looking little masterpiece.


Vintage design from Mike with his lovely finishing touches and great work from the New Pelikan guys produces a terrific little puzzle – available from Bernhard at a competitive price.


Read Kevin’s thoughts over here… spoiler alert: He likes it too!
Posted by allard at 19:05