[...because "Truncated Rhombic Dodecahedra puzzles from Eric Fuller" didn't have quite the same ring to it...] 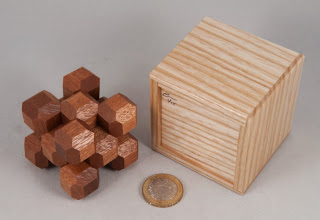 Eric Fuller’s been playing with some of Stewart Coffin’s rhombic dodecahedron designs recently. (Technically they use truncated RDs, but what’s a little truncation among friends?)

A couple of months ago he produced Pyracube and then last month he made a run of Five Piece Clusters along with George Bell’s Cluster with Child. The one thing they all share is that they’re based on pieces made up of truncated RD’s, which means that they go together in strange ways and tend to give rise to odd angles every now and then – which confuses the heck out of me - I have a hard enough time keeping up with puzzles where everything is perfectly orthogonal all of the time… these things introduce some wonderfully trippy diagonals as well… 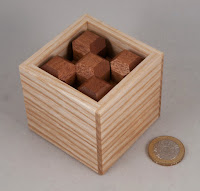 Pyracube is a box-packing puzzle at its heart, but has a few other challenges up its sleeve. It’s one of Stewart’s very early designs (#19 in fact) and Stewart found it interesting as the pieces would pack, rather snugly into the accompanying cubic box either with or without the single cubie piece – using different configurations. The pieces will allow you to construct a 5-4-5 piece cube or a 4-5-4 piece cube – with the same external dimensions… that’s rather cunning.

In addition Stewart set a number of further construction challenges, starting with a square 3*3*3 pyramid and going onto a number of shapes whose name I will not even try and guess…

As you’d expect from Eric, the fit inside the box is good enough to give a little bit of a rattle so you know you’ve found the right assembly, but not nearly enough to let you consider anything too adventurous.

…Pyracube gives a nice introduction to the geometry used in these puzzles – but the next two ramp up the complexity a bit. While they may look identical in their assembled form (colouring aside) – they are very different little beasties. 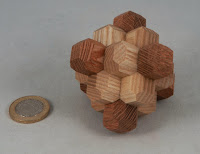 So, next up is George Bell’s Cluster with Child. Assembled it takes the form of an octahedron made up of 19 truncated RD’s. Eric’s given the tips a contrasting colour and while it might not help much on this puzzle, that little feature certainly helps on the next puzzle. 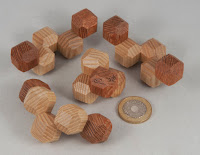 Even though it only consists of 4 pieces, one of which is a key piece – that key piece is rather well conceived so it becomes pretty difficult to stumble across by accident… in fact I spent quite a while trying to find it and I’ve played with a Shapeways version several times before so I knew what to look for… at one point I even began wondering if Eric might have been having a bit of a laugh and sent me a solid, single-piece version. Eventually I managed to find the right spot and grinned broadly as it popped out leaving me with three collapsing identical pieces in my hand.

For me that’s the real beauty of this puzzle – it uses a small number of pieces – three of which are identical! Yet it forms a brilliant challenge … and in my books, dis-assembly is harder than assembly. 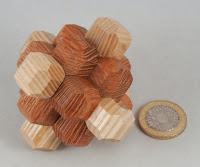 …and finally Coffin’s Five Piece Cluster (#31A) – again the target is an octahedron, but this time the pieces are rather different! As the name implies, there are five pieces, anything but identical! There’s a key piece consisting of a single cubie this time – and it’s not that easy to find, with Eric’s tolerances ensuring that you need to not only find it but also tug it in precisely the right direction before you’ll have any clue that you’re doing the right thing.

Release the key piece and you find that the remaining pieces come apart in order … this is a serially interlocking puzzle with some rather funky pieces – so you not only have to establish how they go together, but you have to work out the order that will allow you to assemble them. Definitely the hardest of the three puzzles for me… but very satisfying when you find the right assembly.
Posted by allard at 18:33