Just over a week ago I received a rather large package from my mate Shane – he’d been working on his latest puzzle for a while and had been teasing me with pictures and the odd email about progress for a couple of months. Things ramped up significantly when he let me know that the first copy had gone out to Kevin and he was waiting for the maestro’s feedback [Read Kevin's experience over here.] … and then a large parcel, nicely wrapped in brown paper arrived via a courier – game on! 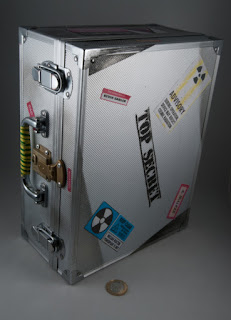 Tearing the paper off I find another well wrapped package inside … and inside that, I find the Pentagon shipping case I’ve seen in the pictures that I’ve been drip fed over the last month or two. There’s a letter with it addressed to Agent 002… inside is a set of instructions from Shane – some immediately helpful (NO BANGING!) others less so, at this point…

Time to take stock: Shane describes his fourth puzzle, The Pentagon, as a prop puzzle – and it certainly fits the bill – the case looks like a weather-beaten steel case that must contain something of great value given the rather large brass coloured latch on the front of it. And the multitude of warning stickers on the outside. And the number of encouraging phrases on some of the stickers (“BAD IDEA”, This is irrelevant” and “This is where I lost interest”). There’s also a number of names scattered around the case that I recognise as the owners of Shane’s other creations – a nice touch!

Shane’s instructions tell me that my mission (impossible or otherwise!) is to retrieve the nuclear fusion code inside –reassuringly he tells me that he’s deactivated the internal timer mechanism (yay?) so I don’t need to rush… o-kay… he also goes on to tell me that any tool will only be used once, and he gives a high level run-through of the stages involved… so let’s puzzle!

I throw myself into the first layer (getting into the case) on the first evening and I have an absolutely brilliant time… after reading all of the stickers – some more useful than others I start experimenting with what I can do… I find that the usual latches work as expected, but the locked third latch in the middle blocks all progress… so I set about finding some means of unlocking it (I’m keeping an open mind at this point!!)  So I go diving through all the packaging in case I’ve dropped a key in there somehow (!) – check there’s nothing in the envelope (nope) – so settle down to a little serious puzzling and make a couple of wonderful little discoveries that give me the means to get inside the case – rewarding me with my first view of the Pentagon – an extremely handsome wooden creation nestled neatly next to a rather interesting little golden object in the centre of the case… PROGRESS!

Careful examination of the Pentagon shows it’s shaped like a pentagon. (I am nothing if not careful! Suspicious and careful.)  It’s made of two halves with a split through the middle and currently seems to be kept together by a rather large bolt in the bottom quadrant. (Shane’s attention to details like the lettering and his signature really make this puzzle look brilliant! … not to mention the lovely wood work as well…) 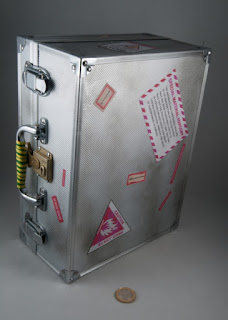 Next step is to find some means of getting past the first stage of the Pentagon’s locking mechanism itself – the “anti-tamper fuse” – you see a pattern here? Are you worried yet? What could possibly go wrong?

I get a bit lucky here (or my inherent suspicion pays off, you decide!) so I find the right tools and get things going, only to find, as Kevin did, that they start locking up again… so start thinking, and fiddling and get some more progress… until I manage to remove that piece, see why it was locking up (SNEAKY!) and find my first goal in the form of a (13A) “anti tamper fuse” – very cute! :-)

At this point in the story, things slow down quite a lot as my sister arrives for a visit and I find myself rather well stumped by Shane’s next locking mechanism… I have the occasional bash at it over the next few days, but I get absolutely nowhere… I’m pretty sure that I know which tool I’m using next, but I can’t work out what to do with it… so I spend about 5 days getting nowhere. Every now and then there’s an encouraging / questioning email from Shane wondering where I’ve got to and telling me I’m on the right track – he doesn’t want me to get frustrated and does a great job of not giving clues while giving encouragement…

Eventually, late into last week I spent some quality time with it and listen to it very carefully, and am gobsmacked when I hear something inside there ticking… so I immediately l drop him an email and he seems to enjoy my discovery, and my amazement! (Later I tell him he's a nutter!)

I make a little more progress that evening, but not really much useful progress toward my goal, but I’ve narrowed down my search area and I class that as a small victory… 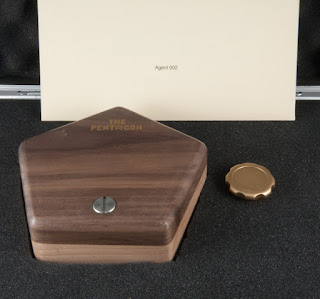 My next session on it comes at the weekend and this time I find something really useful and make a major stride forward – and I’m not at all ashamed that it’s taken me days of ruminating to work out the next step… it is a crackingly good lock!

From there, there’s effectively one more lock to defeat and I suspect I got quite lucky on that one as it didn’t really hold me back for very long at all… so I found myself separating the two halves of the Pentagon and staring at the source of the ticking – spot on it was too!

I retrieved my code and send it back to Hales HQ - job done - almost... still thinking about the last little bit...

That was a brilliant journey of discovery, with every single step deducible (in spite of what you may think!) and each tool interesting in its own way. Having taken everything apart, it’s all delightfully simply engineered – KISS at work! Taking it apart now is a pretty quick series of steps – but they will delight everyone on their first time through it… guaranteed.

It’s a cracking puzzle Shane – you ought to be very proud of this one!