Compressed and Round Trip by Gregory Benedetti 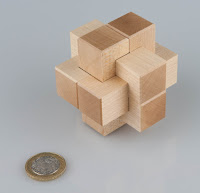 Greg’s burr designs have never been accused of being similar to other designs – Greg’s designs stand out! In their solved states, some of them may look reasonably conventional, but that’s just a ruse to lull you into a false sense of security…

Back in Washington D.C. his Blind Burr kicked my backside very thoroughly when I tried to solve it in the Design Competition room… and I was delighted when I finally worked it out. The Ambigram Burr changed the rules quite a bit and his Glued and Welded burrs are just the thing to inflict on someone who reckons that a burr is a burr is a burr… 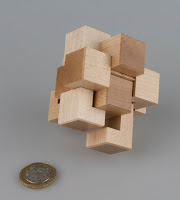 At last year’s IPP Greg came up with another new take on burr design – he’d dubbed it New Old-School (or NOS) and the pieces had a rather distinctive look about them… with a few diagonal cuts it was clear these pieces were meant to slide along one another in pretty unusual ways. He’d had a few of his new designs 3D-printed and was handing them around for puzzlers to have a bash at… and one evening I spent a good hour or so trying to assemble what Greg assured me was the simplest of the ones he had there… I didn’t feel particularly bright as the others were all solving them far quicker than I was…

One of the other people showing a fair amount of interest in those designs at IPP35 was Eric Fuller, so when he announced that he’d made up a few copies of two of Greg’s NOS designs I didn’t hang about… and they are every bit as good as I hoped they’d be!

Start fiddling with this one and you can actually get one or two pieces to appear to move in a pretty standard manner… it doesn’t seem to help, but it is a little comforting!

Experiment a little more and you’ll find pieces start interacting, and then things start getting really funky! Soon enough you’ll have pieces heading in all sorts of different directions and shortly after that you’ll find you have a hand-full of pieces!

Well done… now all you have to do is reassemble them – Good luck! 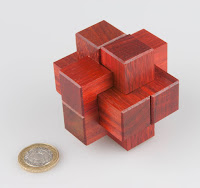 [Actually, with only two types of pieces it’s not too difficult but seems a bit fiddly the first few times… but rest assured – there’s a reasonably simple strategy for putting them all back together again that doesn’t require an extra pair of hands and the skills of a circus contortionist!]

…and I’m willing to bet that you’ll be rather surprised at the final move-count… after all the other interesting things you tried to do with those pieces earlier on in your journey… :-) 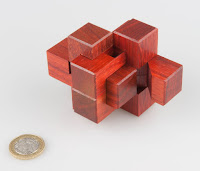 NOS 3 a.k.a. Round Trip is a lovely rich Padauk. Once again this is another wolf in sheep’s clothing – fiddle around and try to find the first move, and when you do, it is guaranteed to take you by surprise! Weird stuff happens – all by itself… this thing takes on a life of its own.

…get past that first little surprise and then it sort of behaves itself – as long as you’re OK with multiple pieces moving all the time..

The first piece is released after a few moves, but the next takes quite a few more – and they’re quite interesting… until you manage to totally dismantle it and find the pieces are all unique – and if they don’t imbue you with great respect for Master Fuller’s craftsmanship, you aren’t paying attention.

Putting this one back together again is a totally different challenge to NOS 1 … and provides a nifty exercise in logic.

A couple of awesome Benedetti designs cleverly made by Fuller … hopefully there’ll be a lot more from that team – and you know it’ll be a wild ride if there is!

...and don't just take my word for it! Kevin really approves as well!!