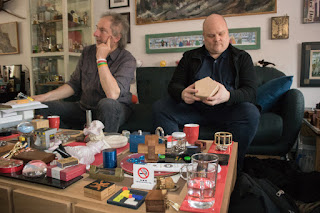 A couple of weeks ago I got to enjoy a wonderfully indulgent weekend away puzzling… Wil Strijbos has an annual open-house / puzzle party on or around the Netherlands' King’s Day holiday. It’s an opportunity for his friends from all around Europe to meet up, play with his puzzles and perhaps even purchase one or two things from the man himself.

I’ve missed the last couple of them due to having other things on those weekends, but this year I was determined to make it back so I booked the weekend out ages in advance and as soon as Wil confirmed the date I booked flights and a hotel so I had no excuse not to be there… 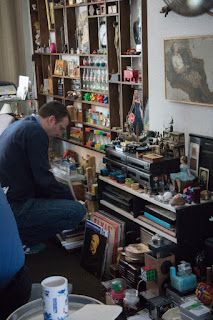 This year we managed to convince a couple of other MPP-ers to traipse along as well: Steve and Shane flew into Eindhoven on the Saturday morning and I joined them there in the afternoon via Schipol and the extremely efficient Dutch train system. Louis met me at the train station (I managed to find my way that far!) and we got me checked in at the local Holiday Inn where Shane and Steve had also just checked in. Louis took us back to his place for some gentle afternoon puzzling before Mieke filled us up with a delicious dinner.

Things took a serious turn after dinner when we all marched down the road to attempt a room escape at the Eindhoven Escape Hunt Experience which had recently opened up just around the corner from the Coolens… pure chance, eh?

Mieke and Laura joined the slightly more hardened puzzlers and we had a great time escaping from the Cosmology of Life room… I say escaping, and we did get out, with plenty time to spare, but we managed to do it without solving a few of the puzzles in the room – you see, we had Shane with us… and when Shane sees a combination lock, he sees it as a lock-picking challenge, so he motored through a whole bunch of them and we had a hard time keeping track of which combinations we’d used by the time we got to the end of the solve… and of course the final two locks were high quality locks that were a lot harder to pick so we actually had to solve those puzzles properly! [There was a fun version of Rush Hour where you needed to use a magnet to move the cars around…]

Louis collected us from the hotel and we headed cross-country to Venlo where we surprised Wil as he was trying to finish his breakfast – the English are keen, and early, it seems! Ushered in, he soon had us coffeed up, relaxed and puzzling in his lounge… among a mythical collection of fabulously rare puzzles… heaven.

And then the other puzzlers began arriving, and it was wonderful catching up with old friends I hadn’t seen for a while, and meeting people I’d only swapped emails with for the first time… I’d only been there half an hour and already it was all worth it! Just brilliant!

Michel was one of the first to arrive and I found myself sitting on the floor while a few of us played with his new copy of Jack Krijnen’s modified version of Goh Pit Khiam’s Racktangle – with added n-ary-ness… quite a treat.

Later on I had a chance to meet Jacques Haubrich who runs some rather nice puzzle auctions from time to time… no prizes for guessing how we know each other! After exchanging emails for ages it was great to meet Jacques and chat puzzles for a while at Wil’s. 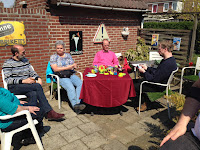 As you might expect, there were a few prototypes of future Strijbos originals lying around and occasionally getting played with – sadly I was not allowed to buy any of them! (Yes, I tried!) There are some more cracking puzzles to come from this man in the near future… watch this space.

Wil had an absolute hoot demonstrating his tricky sewing box with randomly locking and unlocking drawers much to everyone’s amusement – even trying unsuccessfully to GIVE it away a few times… before bringing out a lovely Japanese puzzle chest that Rik and his kids spent a while working their way through… it’s always nice seeing a couple of generations from the same family working on a puzzle collaboratively! 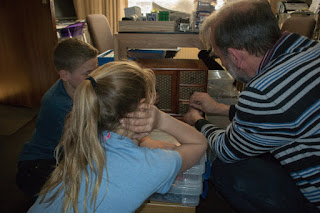 I managed to bag a couple of large-scale simple disentanglements to add to my collection and one of my mates managed to score an arboreal herbivorous marsupial - he was mighty chuffed, let me tell you!

When all was said and done and most folks had left a bunch of us decamped off to Wil’s favourite Chinese restaurant for a serious banquet of a dinner… and then a few more hours puzzling back at Wil’s place before Louis drove us all back to Eindhoven after a seriously long day’s puzzling… it all made for a brilliant puzzling weekend – thanks Wil, and Louis!