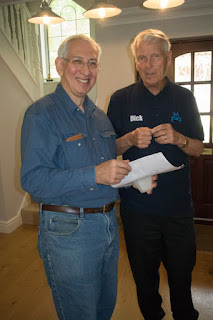 Each year, just before Wimbledon starts, I try and entice Dick Hess into coming around for a day or two so that we can get the local puzzlists together for a gathering… he’s fallen for it a few times now… and last Friday I took the day off work so that I could collect him from the station and spend the day chatting about puzzles and tennis and life in general… Gill and I had a great day with him – and that evening we collected Louis from the airport which could only mean one thing: an MPP was in the offing... and sure enough, next morning the puzzlists descended on Puzzling Times HQ.

Gill left early on the Saturday morning to attend a workshop a friend was running in Alcester, leaving me to ready the house for the impending arrivals. 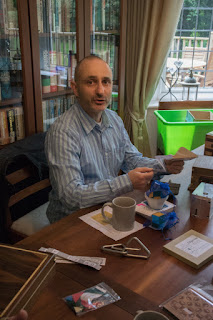 I’d unwittingly arranged a bit of a test for the arriving puzzlists in the form of some major roadworks in our street that resulted in almost everyone having to negotiate some interesting detours, and then negotiate with a surly construction worker to allow them safe passage past the obstruction he was manning with strict orders to keep them out… they all made it through.

Apart form his usual mathematical challenges, Dick had carefully prepared a number of new puzzles to dish out to everyone – after last year’s Four Keys puzzle (which I’d done 90% of and needed Dick to restore the final key for me!) he brought us the Five Keys puzzle – consisting of – you guessed it – 5 differently shaped keys trapped on a trapeze – so far I’ve looked at it, confirmed that all five keys are currently attached and taken a pic of the solved state… and sometime in the next few days I shall embarrass myself by attempting to remove and replace the keys… it only took me the best part of a year last time… Thank you, Dick!

Shane had brought along a couple of prototype lock puzzles that several of us had a go at – and without exception, we were encouraging him to manufacture them and inflict them on a wider audience.

Oli presented everyone with a 2 pence version of the obloid wobbler and they were duly rolled around to much amusement... cheers Oli!

Big Steve had brought along copies of a Wimbledon-themed Coffin-like 3D-printed puzzle for everyone – a lovely idea and rather generous of him… I didn’t get a chance to play with it until the following day and it’s a great variation on a theme that makes for a really interesting little puzzle: six identically-shaped pieces in three colours fit together to make a neat little rhombic dodecahedron – Thanks Steve! 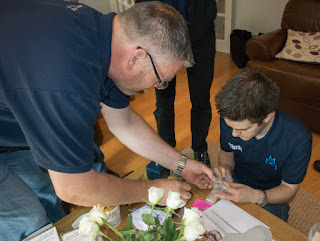 James had brought along a couple of challenges for us all: a copy of the World’s Fair Prize Puzzle from 1891 confounded everyone, as it had done at our last PMPP, but several folks had a lot more success tackling his yoghurt pot challenge to assemble 6 pots into a three dimensional cross shape in such a way that it holds together of its own accord. I saw several complete structures and also witnessed a number of sheepish looks when a passer-by picked up one that someone else had assembled, only to have it fall apart in their hands… some of the advanced challenges with smaller pots and other sorts of plastic lids didn’t meet with as much success, so we decided they were probably impossible!

Lunch consisted of several pizzas, a couple of quiches and even some salad – can you tell that Gill had organised the food and not me? Oh, and the ice cream and choccy sauce went down quite well afterwards.

I’d left out my copy of Pavel’s Edgewise for folks to solve for me (having failed abysmally on my last holiday to do so myself).  A couple of folks, led by Chris duly had a stab at it and found some really interesting “features” – but couldn’t quite crack it … although later that evening when everyone had wandered off in their respective directions, Louis and I had another bash at it and ended up actually managing to solve its multi-layered challenges – tremendous sense of satisfaction, almost smugness, ensued.

A couple of copies of Wil’s new Pachinko box were in evidence and a few guys who hadn’t bought one managed to have a go at solving them… and I think that Oli managed to get all the way through it – well done that man!

Somewhere around mid-afternoon I had to run Dick back to the station so he could get back to Wimbledon in time for his dinner date, so I put Ben in charge and left the puzzlers at it… and when I got back from the station, somewhat drenched from the superbly ill-timed downpour that arrived just as I was escorting Dick into the station, everyone was still puzzling furiously – in fact, had I not told them I was going out for an hour, I suspect that none of them would have been any the wiser!

Simon entertained us with a set of rebuses (rebii!) that his daughter had created and several times you’d see a flash of recognition when someone was sounding out various words and suddenly they would join together to form the title of a well-know movie… good fun and rather well designed, and drawn, by Charlotte!

I did learn one very important lesson that day: NEVER. EVER. Tell puzzlers that a particular disentanglement requires a little force!

I’d left out an intertwined pair of C’s and mentioned that they were a bit stiff so a little force might be required… seems that form then on, anything was fair game and the resulting entanglement wasn’t untangled for the rest of the day… in fact it took Louis and I about half an hour, WITH A VICE, the following morning to encourage the unnaturally joined pieces apart … then we spent a little while tuning the pieces so that excess force would never again be required… probably serves me right for not doing that before they all arrived!

BTW did anyone, by any chance, end up with an extra copy of Dick's new book inscribed to me - I can't find it anywhere...
Posted by allard at 21:36