[Let’s see what sort of weird traffic Google sends to my site this time!] 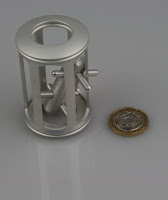 Several of my puzzling mates have been talking about Radek Micopulos’ hedgehog shop and I’d been meaning to get off my backside and put in an order for a while, and then a few weeks ago Oli brought around a couple of examples of Radek’s work and a few days later I’d put in my order – they look really good in the flesh!


Radek’s website has a bunch of interesting information about hedgehog puzzles in general, and if you speech Czech, it has a great little shop – now Google Translate will help you understand what’s in there and get a feel for the prices, but when you try placing an order, there’s no way to give it an address outside of the Czech Republic – which is a bit of blow if you happen to live in a village in England… a short email to Radek introducing myself and asking about the ordering process soon had me agreeing an order and sending across some PayPal… which of course arrived just as Radek was about to head out on a two-week holiday – but just over two weeks later, a delightful little package arrived in the Midlands countryside.


The Hedgehog Shop (not its real name, but I can’t resist, even if only to broaden the puzzles’ appeal to animal rights activists!!) has some wonderful variations on the theme – all of them really enticing and I ended up getting a few representative samples of the different sorts on offer, and I’m really glad I did… because when I say they’re variations on a theme – that probably puts them in too narrow a categorisation… :-) 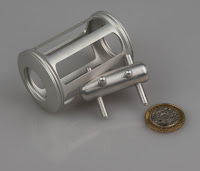 First up is probably widely known as a torpedo hedgehog although Radek's name of Spikeroller is probably more descriptive (you don’t often find torpedoes with spikey bits sticking out at odd angles, do you… do you?).


It’s a pretty well-known design that has been produced by stacks of other puzzle makers over the years… there is a standard solution that requires some careful observation and some wonderful manipulation in three dimensions – very satisfying stuff!


As you might expect, Radek’s site has several variations on the standard spikey-ball-in-a-cage puzzle – I chose the fancy aluminium version that appears to have the cage spun from single piece of aluminium (very nice work) and a spikey-ball with a little secret inside it. 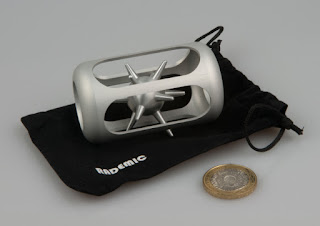 This version similarly relies on observation and manipulation, albeit with an added little surprise that when you extract the spikey-ball, you’ll find it unscrews and hides a copy of a set of plans for a flying bicycle… why? I haven’t the foggiest, but it’s a lovely little whimsical surprise… and it’s all very beautifully made! UPDATE - SEE BELOW!


Oh and the special versions come snugly in a velvet drawstring bag inside a neat, branded protective can. Nice touch!


Now this one’s a little different...


The first clue is in the spiral bars on the cage – then you’ll spot an interesting slot in one of the ends of the cage… and then notice that the end is double-layered and the inner layer has a number of oddly spaced slots in it as well…
Oh, and the ball has fewer spikes than you might be expecting… 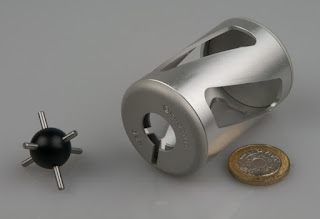 Walk in the park?


This one requires some thought and planning, and then a bunch of careful manipulation before you’re rewarded with a ball in one hand and a cage in t’other.


Lovely little sequence of moves in there…


If the Gen was a little different, this one’s from another (rather heavy-duty!) planet. Not only is the cage a much heavier affair, but each of the ends has an embedded (swivelling!) ball bearing race in it… giving it a brilliantly industrial look and feel – as well as a few extra little things to play with. 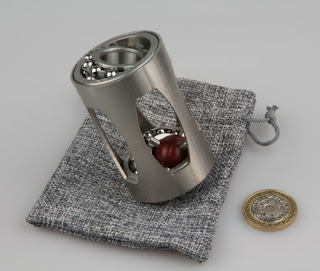 This one took me easily the longest to solve – I spent quite a while playing around with all the usual suspects on a puzzle like this and (enjoyably) got absolutely nowhere! The ball is clearly(!) too wide to get between the bars on the cage, and the spikes are too long to permit any sort of passage through or around the bearing races… so I decided that it was probably impossible – if only it weren't for that gnawing memory of a pic of Oli’s  with the ball perched on top of the cage…


Having decided it was impossible, oddly, released me to imagine exactly how it could be solved – et voila!


Addendum: That Flying Bicycle?? - Thanks to Brett Rothstein for pointing me at the IPP28 Sounvenir Book where Peter Hajek explains everything! The hedghog puzzles made a virtual appearance in a kids' magazine ("Young Announcer") where a group of lads ("Fast Arrows") solve various mysteries and crimes - one episode has them tracking down the top secret designs of a flying bicycle which have been cunningly hidden inside a puzzle - a hedgehog puzzle! All of which makes Radek's nod back to the start of it all even more brilliant!
Posted by allard at 18:01