[I've had this post teed up ready to go for a while but I wanted to put some space between my write-up and Kevin's - over here... a suitable time has now passed.] 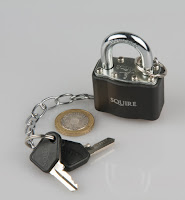 A few months’ back Shane was visiting along with a fair bunch of other puzzlers. At one point during the afternoon he pulled me aside and said he wanted to show me something… actually he had a few things to show me, but one of them is the subject of this blog… he had a candidate design for Haleslock 2 and he was looking for thoughts on it… in his usual self-effacing style, he wasn’t sure if it was good enough… so a couple of us played with the prototype and we all told him to stop worrying and make up a large batch of them – it’s a great puzzle!

…a couple of months later I came home to find a padded envelope from a familiar London address. Inside was a preview copy of Haleslock 2 in all its glory, along with a sealed solution sheet. I love coming home to unexpected puzzles!

After dinner, I set about running through the solution and was delighted that (a) I could remember how I’d solved it the first time, and (b) it still puts a smile on my face even though I already know the solution. 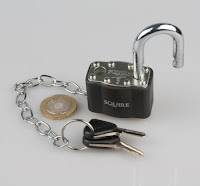 Shane’s taken the prototype and produced a highly professional version here – the doctoring of the lock has been beautifully done and the finishing and attention to detail – right down to the stamped signature and number “2” on the top plate of the lock… it looks the business!

OK – let’s talk about the puzzle a bit then – this is nominally a puzzle blog after all!

Haleslock 2 started out life as a size 37 Squire Strongholdpadlock – but I suspect there’s only a passing resemblance to that original state now… it comes with a useful length of chain locked to the padlock with the appropriate keys on a ring… although one of those keys doesn’t look very useful in the traditional sense… and as you might expect, trying the keys in the lock has little or no discernible impact! (It wouldn’t be much of a puzzle if it just opened, now would it?) 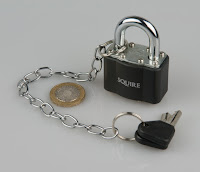 Along the course of your solve, you will be allowed to see some of Shane’s rather nice handiwork and might even learn a little bit about padlocks along the way… it’s not extremely complex or complicated, but it will definitely put a smile on your dial…

[As I write this, Shane has sold out of all of his copies of Haleslock 2 … they should be available from the usual fine purveyors of puzzles… ]
Posted by allard at 08:00