I joined the Karakuri Club several years ago and I've never been disappointed, and I tend to encourage any other puzzlers I come across to join up. For a fixed sum per craftsman you get a set of wonderful presents just in time for Christmas... You never know what you're going to be getting, but you're pretty much guaranteed good value for money - and along the way you're providing the Karakuri guys with working capital for the year - I think it's a great deal for everyone. 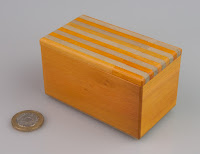 Last year I opted for six out of the eight craftsmen knowing that I would almost certainly like their presents.

Tatsuo Miyamoto brought us the Clown Fish box - a super colourful decorated box with an obvious break across the lid of the box. Exploring the lid yields some interesting movements and a peek inside at an animated clown fish. Very cute! 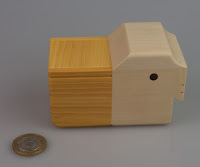 Osama Kasho produced a Pelican this year, although I must admit that I took a while to work out what it was and spent quite a while thinking it was something akin to the rabbiduck ambiguous drawing ... Of course as soon as someone points out that it's a pelican, you can't unsee it... A reasonably simple opening with a huge storage space inside the big bird's bill, as you might expect! 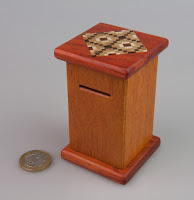 Fumio Tsuburai brought us a new variant on the Coin Bank, which if the name is anything to go by is the 16th variant the Karakuri folk have brought us over the years. The mechanism for this reminded me a little of one of the other Coin Banks I have and one or two purists have been known to grumble about the need for an external tool...

Twin 4 is a further development in Hideaki Kawashima's Twin-series. This is a great little puzzle box that uses all sorts of interesting movements and combinations to eventually allow you to find two large recesses... And the wonderful thing is that you still aren't finished at that point. All of the boxes have their maker's mark on them somewhere, usually on the inside... And if you've been paying attention, when you get to find the second recess, you still haven't found Kawashima-san's hanko- so you need to keep going until you find it... Really nice puzzle! 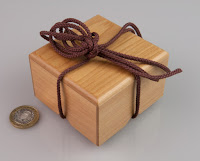 Akio Kamei gave us a String Box variant that looks pretty similar to some the earlier variants, only this one doesn't behave like them at all! In fact I had a lot of trouble with this one and ended up getting Louis to give me several large hints - it is a bit of a sod and requires a fairly deft touch... You should be able to work out what's going on and what you need to do, but it's pretty darn tricky!

The final puzzle in my Christmas haul was Bean Bag Drawer 3 from Hiroshi Iwahara - if Kamei's puzzle was tricky, this one's a beast! The drawer pulls out a bit quite easily, but it's clear that it "should" come out a lot more, and there's a red slider that doesn't seem to do a lot at all - and somehow you need to manipulate "things" in order to fully open the box.

Like previous year's Bean Bag Drawers, this puzzle has a wonderfully delicate reset feature that I found myself triggering rather often. A careful inspection does yield some helpful clues as to what you're trying to do, but even then, it's rather tricky, quite fiddly, and then there's that darn reset waiting to send you right back to the start again... It took me a long time to open this one for the first time - Christmas was a dim and distant memory when I opened it on my own for the first time...

...as I write this blog I've just signed up for this year's Christmas presents.

Spoil yourself!
Posted by allard at 22:30