Ages ago I had the good fortune of playing with some of the original series of Ninomiya crate puzzles… the master had produced some innocuous-looking crates that hid some wonderful secrets, most of which I’d managed to discover over a couple of visits to James’ emporium of wonders.

More recently the master has created some smaller crates as part of the Karakuri Christmas presents. Given Ninomiya’s incredible reputation for precisely-made, wonderfully original puzzle boxes, they tend to be pretty darn popular and as he’s been doing this for a very long time now, his production capacities are limited – so if you want one of his presents, you go into a lottery – I always try – I never win them!

…so when I recently managed to acquire a couple of them, I dived on in – and I was duly delighted with them!

They literally resemble a couple of little packing crates, complete with reinforcing strips around and across the ends, and at their waists – with a neat little maker’s mark subtly in a corner.

When I first got them I had no idea what to expect – other than the unexpected… a little fiddling around on the first one and I found a couple of little movements before something rather unexpected happened and the box opened up in a most unusual manner!

Closer examination of the mechanism, and a little back-tracking and you discover that some of the steps along the way are total red herrings – lovely little piece of humour from the master – I, for one, was caught for a sucker!

The second one took me several evenings of playing before I even got close – the moves were a little tight and I was hesitant to increase the pressure until I was thoroughly convinced I was on the right track… that continued for a couple of evenings until I was pretty sure that I was almost there, but I couldn’t get it to open up… 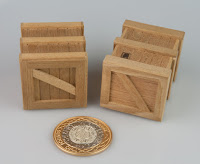 … next time I was chatting to James I asked about the solutions and he pointed me to a pic of the two crates next to one another in their open positions (well-hidden behind a spoiler tag in case you’re worried!) – one looked instantly familiar and the other confirmed that I was indeed only one step from the solution – so we introduced progressively more and more pressure until it finally opened – also in an unusual manner.

I left it open for a couple of day and that helped a bit to reduce the pressure required, but eventually when Louis came around to visit we decided to apply a little sandpaper to a particularly shiny spot in the mechanism and things are a lot smoother now – to the extent that it can safely be given to puzzlers who don’t know it without fear that they’ll need to force things…

A cracking coupla crates! (even if they are a bit smaller than I thought they were...)
Posted by allard at 21:50