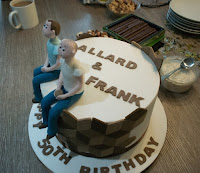 This one took me by surprise, quite literally!
I thought I was heading up north for Frank’s surprise 50th birthday party, coincidentally a couple of days after my own 50th birthday. Our conniving wives had been arranging something rather special for Frank’s birthday and I was supposed to be part of the subterfuge by keeping Frank side-tracked during the afternoon while they set up the venue for the party… which all sounded rather plausible… and indeed, that was how it started out when we arrived.
Frank was a bit surprised as he wasn’t expecting us to rock up just before lunch – they live a couple of hours north of us… he managed to recover and duly put the kettle on and made us a coffee while I brought out some puzzles to play with – and the surprise was soon forgotten. 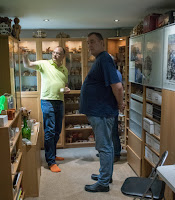 I got the tour of Frank’s new puzzle room and spent a while oohing-and-aahing over the endless shelves of kumiki puzzles of all varieties and vintages… and Frank’s enormous collection of Journet puzzles… and the impossible objects spread over several shelves… you get the picture: Frank has an impressive puzzle collection!
Jo duly laid out an enormous spread for lunch and we literally feasted…
After lunch there was a ring at the doorbell and Big-Steve and Shane rolled in having driven up from London… for the puzzle party I didn’t know about, but seemed to be handily positioned to attend…
A short while later, another ring at the doorbell brought in Simon Nightingale with a pile of puzzles… at this point I’m starting to smell a rat, and realise I’ve been set up almost as much as Frank –  Jo had decided we should have a Northern Puzzle Party and chose the proximity of our milestone birthdays as the best excuse to hold an inaugural NPP.
Shane and Steve get into the birthday spirit and give Frank and I each a unique gift… Shane’s present is a custom HalesLock for each of us: mine is a customised prototype HalesLock3, safely locked inside a wooden presentation (puzzle) box. Over the course of the next hour or so Frank and I try to open the boxes and we struggle – at one point both of us are tapping, banging, spinning and blowing in them with zero impact…

Focus shifts to Steve’s gift – a 50-piece collaboration with Derek Bosch [Thanks chaps!] … a big ball of a thing beautifully packaged in a box, wrapped in a neat little bag…who says boys can’t wrap presents?! I have a careful look at mine and start encouraging Frank to spin his to open it up… with quite a lot of encouragement from Steve… turns out it doesn’t take a lot of encouragement and Frank is soon on his knees on the kitchen floor giving the ball a good old spin … which duly sends most of the 50 pieces flying in all directions and spreading several bags of confetti that had been cunningly installed in the internal void spraying across the floor – with more than a little laughter from the assembled puzzlers (who’s kitchen floor, this was not).

Frank saw the funny side almost immediately, and then set about collecting the pieces… and the memory stick that had been cushioned by all the confetti inside the void. With the puzzle pieces out of the way, Jo brought out the vacuum cleaner that then did a great job of blowing the confetti even further afield… with a dustpan and brush eventually saving the day and restoring the kitchen to pristine cleanliness once more.

The puzzling gets interrupted for a giant joint birthday cake for the two of us organised by Jo – complete with some serious pyrotechnics and lifelike Allard and Frank figurines sitting next to one another on the top – cue several inappropriate comments about the extent of our friendship and what a nice couple we make… just as well we’re among friends!
Soon after the girls disappear to do some girly stuff (or decorate the hall for Frank’s surprise party later on) and the puzzling continues.
At one point Frank looks up and asks me if I’ve opened Shane’s box yet – apparently the sight of me shaking and banging the thing weren’t enough of a clue – so I admit I haven’t, much to Shane’s amusement – the boxes were apparently an afterthought and weren’t intended to be a serious puzzle at all… yeah, right! He starts throwing hints and suggestions around wildly in the hopes of helping us make progress and eventually we manage to open the boxes… the locks are another story – I’m pretty sure I’ve seen the early Haleslock3’s, but this one doesn’t behave properly at all… and a little puzzling later I discover why – it’s a totally different puzzle! It just happens to look the same on the outside… except for the “ALLARD 50” stamped on the one side of course. [Thanks mate!]

Simon has brought along a crate-full of wonders and we let Frank have first go at selecting some new toys in return for the customary donation to charity… I pick a few things for myself before allowing the others to have a go… and then go back for another rake through the leftovers… I will need to be generous in my charitable donation!
Steve suggests that we plug the mystery memory stick into a laptop sometime soon as the content is a little time-sensitive - we all agree that Frank’s work-laptop is probably the best choice and fire it up. There’s a movie file on there so we hit Play and sit back… to watch a number of characters from all around the inter-web wishing Frank and I a Happy Birthday. Being the naïve sort, I assume these wonderful people are all friends of Steve (and Derek) and marvel at the wonderfully diverse set of friends they have… seriously diverse!! I spend at least 10 minutes in tears laughing at the messages and their, err, creativity. By the end of it I am reasonably convinced that Derek and Steve don’t have a politically correct bone in their bodies – and I haven’t cried with laughter that much in an awfully long time!

During the course of the afternoon my phone keeps ringing with various phone numbers I don’t recognise as a variety of international puzzle friends from around the world call in according to a pre-arranged roster to wish Frank and I a Happy Birthday via Facetime… Nigel from a warm-looking Spain; Ali and the girls sang Happy Birthday for us; Peter, Lesley and Roxy wished us well from Canada and Neil wished us a Happy Birthday and showed us around his huge workshop, pausing to show us the blue sky and yellow sun – something we don’t often get to see in the UK! Brian and Sue had realised that when we were having our NPP it would be literally in the middle of their night, so they sent us a pre-recorded birthday message dressed in appropriate puzzling gear: Brian wearing an LED-adorned Rubik’s Cube t-shirt and Sue was dressed as a Rubik’s Cube (2*2*2 as appropriate for someone her size)… a wonderful surprise and super to be joined by our puzzling friends around the world – albeit digitally – thanks for taking the time folks! 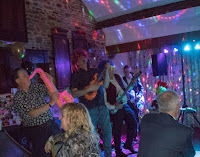 Somewhere around 6pm the guys faded under the guise of heading back home, leaving us to confuse Frank a little more as he fished for information about the evening… we told him we were going out for a pizza, which might have been believable for a while… of course when Jo led him blindfolded into the local golf club and we all yelled "Surprise!", the cat was sort of out of the bag… and a fabulous party ensued!
We’re going to have to have another NPP one of these days – they’re great fun!