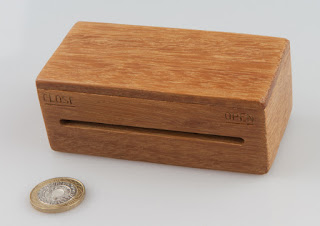 A friend of mine is trying to raise some money for a really good cause: Cancer Research in The Netherlands. He’s auctioning off a copy of his entry in last year’s Nob Yoshigahara Puzzle Design Competition – the MiSenary Puzzle Box – or Michel’s Senary Puzzle Box.

I first got to see a prototype of this puzzle at Wil’s King’s Day Puzzle Party last year and it thoroughly confounded me. It was a totally enclosed box and you could sometimes hear things moving backwards and forwards when you fiddled around with the orientation… and sometimes it sounded like those things were moving further, and sometimes shorter… 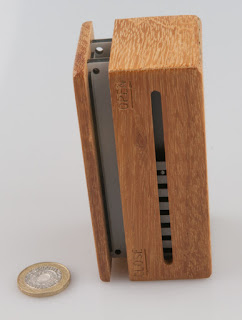 I fiddled with it for a while and didn’t feel like I was making any progress whatsoever… so gave it back to Michel, who then opened it and showed me the insides… and I rather liked what I was seeing inside there, but my dodgy hearing meant that I wasn’t able to distinguish the nuances of what was going on inside there… and feared it would be pretty hard work trying to deduce what was going on inside there in order to solve it blind the first time… so we had a bit of a chat about it and we suggested adding  window along one side… and a few months later a window had indeed been added to the lower part of the box – and I think this makes a massive difference to the playability of the puzzle.

The little window allows the puzzlists to see things wandering backwards and forwards and even allows some deduction about what you can’t see, which is rather crucial to the solving of this puzzle… 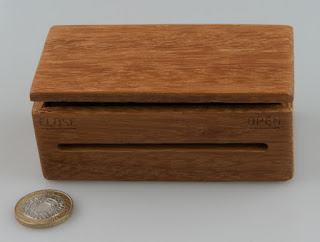 …and I wouldn’t be spoiling the puzzle at all by calling out that the name tells you it’s Michel’s Senary (MiSenary) Puzzle Box… there is an n-ary locking mechanism keeping the lid from opening and you need to find how to manipulate the various parts of the lock through a reasonable number of steps to finally allow the lid to be removed… you can see elements of your progress through that neat little window on the side, and you can easily see if your going the “right way” through the n-ary sequence thanks to the labels on the sides of the window… all good additions to improve the puzzle's enjoyment, IMHO.

If you’re allergic to boxes, it is clearly an n-ary puzzle with a cavity… if you don’t have that problem, this is a neat little puzzle box with an interesting n-ary locking mechanism… either way, this is the last one that Michel will be selling – he’s had enough of the schlepp of fettling these things together and reckons he’s highly unlikely to make any more of them… so if you want one, you need to be generous to a couple of Dutch cancer charities – it’s currently listed for sale on Puzzle Paradise and remember that none of the proceeds are going to Michel or the auction site – everything goes to cancer research.