[The 2018 edition of my usual scribblings about my annual puzzling pilgrimage...] 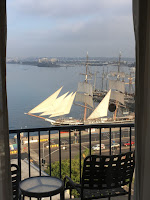 Gill and I have a pretty uneventful flight into SAN and grab the shuttle to the hotel where we find Jen and Neil waiting to welcome us outside. We get checked in and find that we’ve been given an upgrade, although things don’t go quite to plan when we find that someone else is already ensconced in the bedroom we’ve been allocated... a little negotiating and explaining to the chap who’s just checked us in and given us the upgrade, results in the hotel sending a security guy up to the disputed bedroom to discuss the matter with the squatters while we take up residence in the attached lounge awaiting news of our room... after some time I head back downstairs to ask the same chap on the front desk, who’s forgotten me again (it’s great fun telling him the story all over again) if we’ve made any progress - blank looks - at which point the duty manager appears to let us know that they’re going to give us the room on the other side.... so we head over to the hotel restaurant for some potato skins as we’re in the mood for something light and our body clocks are now well and truly buggered... the starters are enormous - mental note for later - American portions.

After dinner we get the keys to the room and we’re finally able to unpack, relax a little and then crash for the night...


...until I find myself wide awake at 3:30am, and unable to go back to sleep, so I get up and fold up 100 exchange puzzle boxes that I’ve carried over flat-packed... then I crash again.

We meet Jen and Neil for breakfast at the deli in the hotel complex where we run into the Udalls.


Neil ran us around to the T-Mobile shop to pick up some US SIMs... which it turns out works well for my phone, but not for the old iPhone we’ve brought along for Gill...so Neil takes us to Best Buy to buy a burner - yup we’ve gone all gangsta!


We head across to Coronado Island for a lovely walk on the beach so that Gill could dip her feet in the Pacific (tick) before having drinks out on the patio at the lovely Hotel del Coronado - it is gorgeous and we make sure we wander past and admire the stunning original mahogany bar counter still running the length of the main bar.

After some bagels for lunch Neil and I spend the best part of the afternoon assembling my exchange puzzles and their associated packaging before meeting up for dinner at the Claim Jumper which gets rounded out by the largest slices of Salted Caramel Mud Pie known to man... it wins.


Work starts in the morning...


I grab us some snacks from the lobby shop for breakfast - mental note: that doesn’t really work for me. After breakfast the girls meet up to go to the Gaslamp District  while Nick, Saul, Neil and I head out to pick up a U-Haul van to collect all of the puzzles and sundries that have been posted to Peter Grabarchuk ahead of IPP38. Nick appears to get himself a bit lost arriving just after us even though he cruised effortlessly past Neil and I in the U-Haul on the motorway while we pedalled for all we were worth! 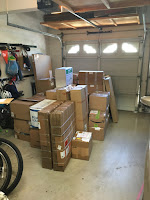 Peter has half a garage full of boxes which we duly sort through and load up so that we can take them all to the hotel in readiness for the oncoming deluge of puzzlers wanting to be reunited with their puzzles.


Part of the load includes a few cabinets for a couple of displays in the Design Competition room, so Neil, Saul and I spend some time assembling cabinets... the first two go together well - they’re new Ikea cabinets so they have tools and instructions... however we struggle a bit with the other two cabinets as they don’t seem to have any fittings... happily they show up a little later and we’re able to assemble them with a pair of baby Leatherman’s. 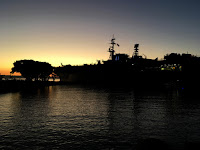 Neil and I return and gas-up the U-Haul and then find it’s going to take an Uber way too long to come and get us - we are out in the sticks at the end of the runway, after all... so we walk briskly back to the hotel where I arrive 5 minutes late for our first official on-site meeting with the hotel staff who’re going to be looking after us for the next few days. We spend a while talking about the ethos of IPPs and what we’re all about and they seem genuinely interested and want to take a peek into our little world... best line of the meeting goes to the Executive Chef, Brandon (never trust a skinny chef! - I trust Brandon!) when he promises we’ll be getting American portions at the buffet after we express concerns about running out of food at the dinners and reception. (And he delivered on his promise!) 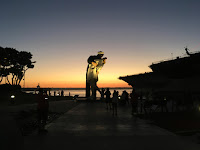 Nick had offered to take Neil, Jen, Gill and I out to dinner in return for helping out on the Tuesday and asks us where we want to go. Not knowing the neighbourhood well yet (I’ve been there two days) I have a brainwave and ask Chica Banan for a recommendation... and we book a table at Top of the Market for later that evening. Turns out it is a fantastic seafood restaurant on top of an old fish market with a stunning view over the bay - at sunset... Nick may well have paid through the neck for a couple of man-days of labour but we had a wonderful dinner - followed by a lovely warm walk back along the seafront to the hotel.


Wednesday sees the official opening of registration for IPP 38 and also the SOAP’s Fabric and Fibre tour that Jen and Paulette have been planning for the best part of a year... there is plenty of excited catching up with friends before the bus heads out in search of fabric, fibre and beads... they are not disappointed.

We set up the registration area and agree a process which then subsequently gets tweaked several times over the next few days and we’ve all got it pretty well-oiled by the second last day of IPP.


While we’re handling registration a new Chico Banan video gets posted telling us that the man himself has been spotted heading for the Mexican border... and then in unrelated news, Big Steve posts from LAX where he is about to board a plane to SAN - concerned for his safety, one well-wisher (OK, it was me!) tells him to “Stay safe, brother”. 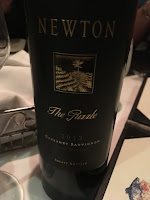 After registration closes for the morning we help Brian, Kellian and her mom get the Design Competition room set up - the well-oiled machine makes short work of it all.


After lunch with some of the gang, Neil and I head out to find him a whistle from the magic shop that Jen and Gilly found the previous day... at the shop we intended to visit we find they don’t have any in stock and they direct us to another shop in the Gaslamp District - we feel the need to refuel on ice cream before heading into the centre of town - American ice cream cones are large - mental note number two.


At said magic shop we find they’re closed, a bit of a drag, but it will allegedly reopen a little later, so we head for a Starbucks... at the appointed time we return and hang around a little for the coolest magic shop dude to arrive back and let us in... Neil finds his whistle and I grab a really unique deck of cards for Wil.


Gill and the girls return a little exhausted from a wonderful day trip with their mates from around the world... happy wife, happy life. :-) 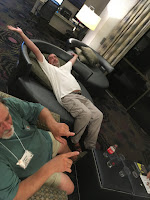 We do a few more hours on the registration table where I generally set myself up at the end of the table, offering free Wi-Fi in return for volunteering to help out around IPP... I manage to sign up plenty of volunteers without annoying too many people... actually I think I only ended up offending one person so I'll take that as a win, given the job! One major upside of doing this is virtually everyone had to wander past me at some point so I got to see all of my friends just after they’d registered... a pretty efficient way of saying "Hi!" to everyone, it turns out.


When registration closes we have dinner with the Pawliger clan and I lose a fight with Helen to at least contribute to the dinner bill - thanks Helen!


Back in the lobby I find Big Steve who’s arrived from LAX - he’s buzzing having seen the latest from Chico on FaceBook so we catch up on the latest developments on the tongue depressor front - it’s an exciting time to be a tongue depressor collector, apparently.
I have a nice chat to  Brian and Frank before heading upstairs to crash for the night.