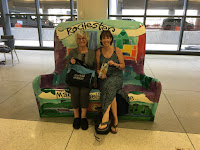 …is another day with some travelling in it – starting with a drive to the airport via picturesque Salem. From BOS we head to ROC in a tiny little Embraer that feels like flying in the equivalent of a sports car. We collect a rental car at ROC and head for Jeff’s place faithfully following the sat-nag’s every direction.

We get the warmest possible welcome when we get to Jeff’s place. We manage to help him move the last couple of bits of furniture into their weekend positions and we’re even allowed to help a little with some the food prep, but Jeff clearly already has everything very well under control. 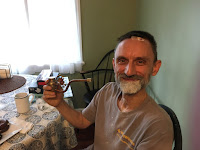 Over the next few hours the gang starts arriving for the annual Rochester Puzzle Picnic, the indoor tables get progressively heavier and heavier laden with puzzles, there’s animated conversations happening all over the place and there’s a wonderfully positive vibe among the whole bunch – this really is a bunch of good friends getting together for fun and fellowship, and some puzzles.

Our first meal is some fantastic BBQ chicken with all the trimmings, followed by plenty of cake.

Shane’s latest locks are getting played with quite a lot and Endo-san’s KOPA box is a firm favourite among those who haven’t seen it yet. Several people enjoy playing with a copy of Spring Camera and most find both compartments, but generally admit they wouldn’t have found the second one if they hadn’t been nudged to keep going… Ken’s new puzzle with plenty of rotations has people scratching their heads.

In between the puzzling I spend some quality time chatting to Rob and hearing about 9/11 from his perspective – and it’s hard not to get emotional listening to his story – even for someone like me who was living in Cape Town when it all happened. Evy and I get to chat about how different our respective roles as actuaries are in our insurance companies and later Jeff and I have time to talk about leadership and M&A activities and even wander into the forbidden territory of Brexit.

Some time after midnight I crash while the hard core of the puzzlers are still going strong in the living room.


By the time we get up Jeff’s already been out to the bakery and returned with fresh bagels for us (apparently, he pretty much cleaned them out) – this is a really civilised way to start a day’s puzzling!

The girls (for there are seven or eight of them) head out to explore the neighbourhood – read: find some craft, fabric and fibre shops – they find lots of interesting places and leave us to puzzle and banter at Jeff’s. 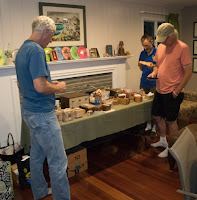 Twice during the day, I find myself being asked to explain the whole tongue depressor / Chico Banan thing, and each time there are guffaws and tears of laughter.

Jeff produces an awesome lunch on the BBQ again, having sous vide’d (if that’s even a word?) all the meat and then added some colour over the coals on his Weber.

More puzzling ensues, including a group solving of Pavel’s Punana Split puzzle… everything went reasonably well all the way through the solve with John not needing to intervene much along the way to help us back onto the straight and narrow, but we did get caught up on the final step and needed to shoot Pavel a quick message for some help… and when the nudge came back we knocked off the final step quite quickly – rather pleased with ourselves! 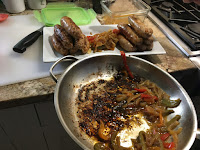 The Strayer’s played a major role in providing dinner that night and the sausage display ended up looking suitably mathematical and required photographic evidence for the sharing.

After dinner, and before most of the gang began departing – although we’d already lost Jesse to the long drive home – we posed for a couple of group photographs, before putting the world to rights and having some really serious discussions on Design Competition Room etiquette.

We said some sad goodbyes, but at least some of the folks we said goodbye to are planning to visit us at MPP later in the year so we have some return visits to look forward to…


For some reason we all seem to be waking up later this morning – nothing to do with lack of sleep, I’m sure!  By the time I get up, Jeff already has a pot of coffee running and we’re soon into breakfast bagels and some gentle puzzling, trying hard not to break the "no puzzling and food in the same room" rule.

Gradually the remaining gang begins to disperse, with quite a few folks leaving soon after lunch (Jeff’s food is worth hanging around for!!) – and soon we’ve gone from having almost 30 people there to just about five of us by early afternoon when we head back off to ROC for a flight to BOS.

…after dinner we head back to Downriver for some more ice cream… it’s best not to fight it. :-) 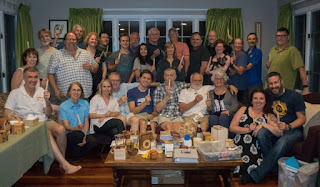 …Monday mainly involves some packing and saying goodbye to Saul and Paulette who’ve treated us royally for the past week in Beverley… we’re really lucky to have such wonderfully generous friends – thanks guys!

…and that, dear reader, is the end of my epic two-and-a-half-week puzzle pilgrimage. 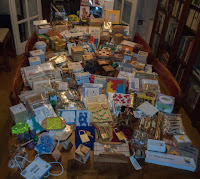