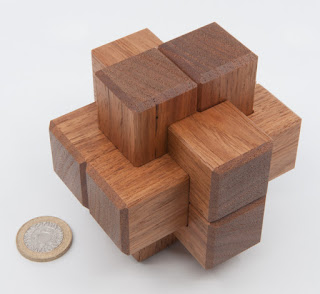 Some puzzles appeal to some people and not to others… burristas like burrs, boxophiles prefer boxes and so on… but what would happen if you could design a puzzle that would appeal to almost every sort of puzzler. The answer must be obvious: you bring lots of joy to puzzlers everywhere and you sell out your edition rather quickly…

I’m not saying that’s what Juno set out to do, but he did sell out of these beauties rather darn quickly… and having played with it, I’m not surprised!

I was also not surprised when it made several people’s shortlisted puzzles of the year for 2018 – is it very good indeed!

OK, so what have we got here?

Essentially, it’s a box, albeit one with a reasonably compact interior… scale model loaves only!

But it looks just like a decent sized six-piece burr… quite literally – there are no visual clues to it being anything more than a straight-forward burr. [Yes. I'm deliberately only showing you the starting position!] 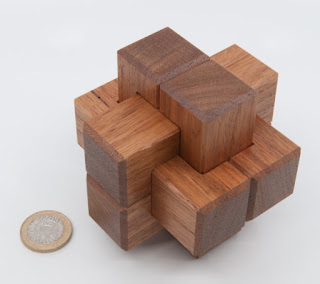 Start playing with it and it’s becomes clear there’s a lot more to it – for starters, things that usually happen on a burr, don’t. In fact, if you approach this as a burr, it will confound you for a long time! (Mental note, leave this on the shelf with other burrs in my puzzle cabinet for the increased joy of other puzzlers!)

Find something unusual and you’ll soon discover you’re not in Kansas anymore – weird stuff happens and things aren’t what they appeared to be, and you’re finding some rather unusual tools – some of whose use isn’t immediately obvious.

From the beginning with what’s “obviously” a burr, there’s a wonderful journey in the middle that is full-on sequential discovery, before opening up the final bits to reveal the locked interior of the box… this one really can be all things to all puzzlers…
Posted by allard at 21:20