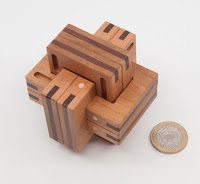 Juno has proved that he’s more than capable of producing fun, accessible puzzles that you could safely toss at a muggle without fear of embarrassing them – he also has a knack for designing some proper-hard puzzles…and for the record, I place his Grooved 6 Board Burr #1 very squarely in the latter category.
Juno’s been playing with Board Burr designs for many, many years… but this one’s from another planet!
A quick look at it in its assembled state and you can’t fail to notice a couple of tracks routed on some of the faces… along with what appear to be the back ends of some pegs that might just be travelling in those tracks. Mercifully there are some exits visible on the edges… but you just know that they’re not going to be anywhere near where you might actually want them to be, don’t you?!
Disassembly is a reasonable challenge: those pins and tracks serious restrict your movement options, and yet, there are several ways of making strange shapes and expanding things WITHOUT any of the pieces coming anywhere near actually coming apart. From an assembled state, this puzzle has a lot of blind alleys to explore… I have the t-shirt! 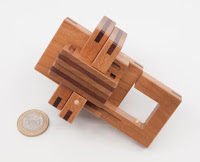 Time and again I’d find a new way of getting things to almost come apart only to find that there was no way to progress – this thing’s fiendish!
…and when I did eventually get it apart, I just knew that there was no way in heck it was ever going back together again without one of two things: either the supplied solution from Juno or a BurrTools model built by my fair hand…
I opted for the latter, and I’m not ashamed! … BurrTools reckons there are 6,653 possibly assemblies for these pieces… that is WAY TOO MANY blind alleys for me to have to explore – Sod’s law dictates that I’d need to explore every single one of them (some of them more than once without realising it!) before I managed to find the one trust path… BurrTools is a much more direct route! ... and even then we're talking 39 moves: 22.6.5...

I told you this thing was from another planet!

PS There's still a handful available over here.
Posted by allard at 08:14