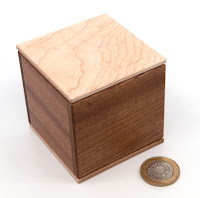 I was really annoyed at myself for missing out on this one the very first time that Eric made them available. When I saw my mates’ copies and had a fiddle with it at the time, I was even more disappointed. I watched patiently as several copies came and went over the years on the various puzzle auctions – bidding on several of them, and seeing every single one head off to another puzzler who clearly wanted them even more than me… and I waited for the next one to come along.

So, when Eric announced he was going to be revisiting the design and releasing another run of them, I made sure I didn’t miss out again, and managed to finally bag a copy for myself.

And it is every bit as good as I remember it.

At the start, you’ll find a pair of lids can be removed trivially, only, instead of a gaping box inside, you find another layer of box – apparently those lids are decorative – you still have a box to get into…

From there the puzzling begins – and the delightful thing is that this box is SO well made, that even working out how it’s going to open is a serious puzzle!

Spend some time working out how things might be useful, and what you could do, and after a while you’ll be able to come up with a plan of attack – but even knowing what you want to do isn’t quite enough, this puzzle will still provide you with a little test of your skills before it will finally relent and let you in.

One of those great examples of a fantastic idea reduced to its absolute simplest – then perfectly produced in wood by a true puzzling master craftsman.
Posted by allard at 15:40