Next morning we head out on the Kanazawa tour after breakfast - missing the bus we’d planned to take and being forced to take the last bus of the day - Gill and I ended up having to share the coach with 14 other people... and Dirk discovered that the seats in the last 4 rows had a lot more legroom, so the naughty kids sat at the back of the bus and made mischief all day... 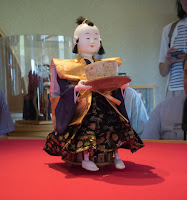 Peter managed to solve the disentanglement I gave him to solve just as we were arriving at our first stop, then promptly dropped the ring on the floor of the bus - plenty scrabbling around didn’t find it, until Saul two rows back got up to get off the bus and noticed it under his seat. 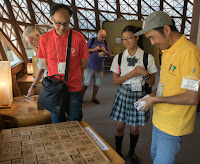 First stop was the Karakuri Museum with a lovely demonstration of their legendary wooden automata. Plenty of puzzles are on hand to be played with in the main building so we spent a goodly while in there duly playing with some well-loved, but still functioning Karakuri creations.

From there we headed to JAIST to see Nob’s puzzle collection. We’re shown around the main display area and the design concept behind the shelving is demonstrated with a 3D printed model - it would all collapse into a cube if you could move the pieces. We wonder at all the wonderful goodies, and Gill points out to me that the first thing you still see as you walk in is the trick jug that James Dalgety presented to Nob.

A couple of puzzlers are moaning about the slim size of the collection actually on display and I mention the archival room around the corner where the rest of it is housed... so they twist someone’s arm and a few of them manage to get a glimpse behind the curtain and see the rest of it... we aren’t as successful.


From there we head off to as food court for some lunch and a couple of us let the side down big time by opting for Mickey Dees... and we’re joined by a few others who decide to go for the simple option so we could explore the shops - Gill finds an interesting fabric to buy so the choice is perfectly justified it turns out! 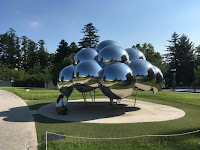 After lunch we visit the Museum of 21st Century Art which I’ve been looking forward to since my last trip here when I didn’t do it justice - there are a couple of really great exhibits (the pool, the tiny Earthman and the black hole are terrific) but I ended up being a little disappointed - which probably says WAY MORE about my own (mis)understanding of modern art than it does about the quality of the display!


Back at the hotel the Design Comp room seems like the obvious choice and I manage to say hello to Chinny across a crowded table of puzzlers, but we don’t get much time to catch up. I’m fiddling with a puzzle or two when Nick comes over to tell me that the girls are heading out for ice cream so we join them - collecting Frank along the way so we catch up a bit as I haven’t seen him since he arrived. We have a good catch up between the three of us - finding out what’s happening in the world of hamsters, standard puzzling and other. Halfway over Gill spots that Frank and I are wearing wonderfully clashing shirts and insists on a silly photo to mock the fact that I’m wearing a (lemon yellow) Kanazawa shirt and Frank’s wearing his (orange) San Francisco t-shirt. A new meme is no doubt already forming on the internet. (“Oranges & lemons, the bells of St Clements…”) 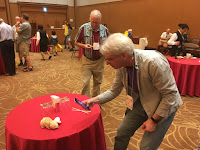 After ice creams there’s a lot more chat in the lobby area before I decide to get less sticky and have a shower before the Founder’s Reception. Spruced up we head down and find that uncharacteristically the doors have actually been opened ahead of the formally appointed hour - so we head in and find a bunch of friendly puzzlers - hundreds of them... everyone works out how to game the system with the drinks vouchers - first puzzle solved. Ryuhei introduces events and Iwahiro does his Superman impression changing from committee member into IPCA President live on stage. He does an excellent job standing in for Jerry who’s missed his first Founder’s Reception ever. Iwahiro introduces us to all of the new IPP members present and they all take a turn at the mic to introduce themselves and tell us a bit about their puzzling interests.


We see Fangyuan and Luchen and we’re greeted like long lost friends, having not seen them for a couple of years - in the interim they’ve got married and we get to congratulate them. Otis and the new couple introduce me to Ayi who’s attending his first IPP with them - they’re doing a great job of introducing him to all the folks they know.


During dinner I get roped into supporting Frank in investing some new members into the Order of the Hamster - presenting them with their certificate recognizing their services to hamsters and their membership pins, before Frank and I tap them on their shoulders and head in turn with our hamsters, the standard Order of the Hamster induction ceremony... video evidence of Nick’s investiture makes it onto the inter-web later that evening.


There’s plenty of dinner, although Gill, Frank and I pretty much manage to miss the entire first wave due to all the investing we’re needing to do - but it’s worth it seeing the mildly terrified looks on peoples’ faces when we first walked up to them brandishing our hamsters.


After dinner I catch with Zohar who I’d met with Dor in Torito last Sunday and we chat about his new family in IPP, Magic, the Gathering, and life in general... he seems to have settled in almost immediately. 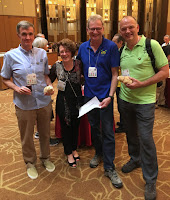 There’s a long chat in the lobby with the Soaps and I spend a while chatting with Brian about his order processing - we geek out a bit and it’s clear that he’s been doing this for a long time and has worked out all of the kinks in the process... and you have to respect the amount of work that goes into all of it.


I crash later than I ought to, but the others still stick around for another five hours... how the heck they operate on that little sleep I do not know.