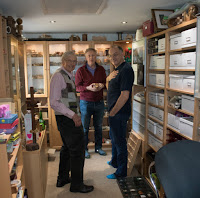 Nick flies in from the West Coast and manages to Escape Heathrow in a record 32 minutes, putting him way ahead of schedule into Birmingham, so Gill has to collect him from the station while I finish up my meetings for the morning – pesky day job!

By the time I get home, Gill and Nick are chatting in  the kitchen and the hounds are making a fuss of Nick – not just because he’s brought them some treats from the US. We get to spend some time chatting about life in general, an almost finished souvenir book, an upcoming puzzle auction and indeed actually play with some puzzles as well. Gill makes sure we’re well-fed at the appropriate times and later that evening we head out to BHX (oddly, via a local gaming arcade, at Nick's insistence) to collect Louis.

A fair amount more puzzling ensues, until I crash somewhere around midnight, leaving Louis with a number of puzzles to solve – ‘cos it seems like the right thing to do.

We’re all up fairly early the next morning for breakfast before heading up the motorway toward Lancashire.  Louis gives me a beautiful Heartwood Creations puzzle box – the first Heartwood box in the collection – and a stack of as yet unidentified hexagonal sticks made by Jerry McFarland… I say they’re unidentified as there aren’t enough sticks for what we think they are, and we don’t know if there are supposed to be more sticks. Time will tell…

The motorway’s a bit of a mess, and the intermittent rain, sometimes torrential, doesn’t help – it takes an hour or so longer than it “should”, but the welcome in Whalley is second to none.

James and Lindsey, Ali, Michael, Shane and Steve are already there and there’s plenty of snacks laid out on the counter – might as well get some puzzles out!

Frank and I do the customary birthday present exchange: I’ve got a spare Chinnyhedron for him and he’s given me a lovely copy of his Digits sliding tile puzzle in clear acrylic with LEDs around the edge to pick out the etching – he’d talked about trying to get it to work on a previous trip and I have to say that it looks fab! Thanks Frank! 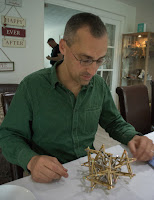 The rest of the puzzles come out and it doesn’t take long for the boys to all be puzzling on the dining room table… lunch appears at some point and the girls head out for a ladies’ lunch and a wander around the village.

The Brass Monkeys have brought along several sets of Nova Plexus in anticipation of a world record attempt at interlinked Nova Plexii (‘cos that’s clearly the plural, right?).

<NOPE! - Geoff reliably informs us that Nova Plexus is already plural... so it should be Nova Plexus!>

Louis has found a neat method for interlinking a number of them, but ran out of sticks at home – the boys have a few spare so the stage is set. Careful to colour-code things neatly, Louis starts with a steel assembly in the centre and then carefully builds three further assemblies in brass, each sharing a common rod with the steel assembly until he has a set of four forming a flat triangular shape. Even with all it’s lackey bands in situ, it looks impressive… Louis spends a few minutes checking everything is oriented the right way around before starting to remove the rubber bands… some of which have become somewhat jammed between a few of the rods. 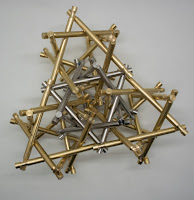 By the time the last bands are off there’s a sigh of relief in the room and calls for some nice photographs to be taken. Frank produces a suitable light tent and we take portraits for posterity. [I wonder if Geoff ever thought that would happen?] 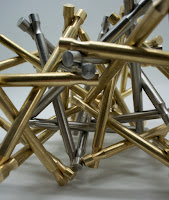 Hot on the heels of a successful fund-raising attempt, Steve still finds he has some spare Nick masks so he’s brought them along just in case anyone feels the need for a mask… some silly “Spot-the-difference” photos ensue – can you spot the difference – uncanny, isn’t it?!

I’ve taken my copy of Jewel Thief along intending to spend some quality time puzzling, but I don’t manage to get around to it – Shane does and has the entire thing totally dismantled in short order… and having seen the pieces laid out I don’t feel any closer to being able to solve the thing myself… maybe next NPP…

Simon arrives during the afternoon and brings in several crates-full of puzzles that he’s hoping we’ll take off his hands… several folks find some treasures and they’re duly asked to donate what they think they’re worth to Oxfam… he’s a generous bloke is Simon.

I’d also taken along my copy of Ken’s Broken Soma… I’d inflicted it on Nick and Louis the day before and they both liked it so I made sure that some more people got to “enjoy” it at Frank’s – I say “enjoy” because it is positively EVIL… and deserves a blog post all on its own… so I won’t say much more here other than nobody found it simple.

The girls arrived home suitably invigorated from a lovely walk around the village, managing to evade the rain almost entirely.

Jo wrangled a scrumptious dinner for twenty and we feasted for absolute ages – almost making a dent in the provisions. After supper there was a(nother) brilliant puzzling birthday cake for Frank and I – complete with replica Shuckman Kumiki puzzles made in icing. After the pyrotechnics we cut the cake and enjoyed it as dessert.

Jo was keen for a game of some description so we all teamed up for a highly competitive game of Colour Brain… The Two Brass Monkeys and I started out well and then faced a long lull in the middle of the game where several other teams vied for the win, before we managed to snatch defeat from them all right at the end. Memorable moments included Gilly sadly getting a Peanuts question wrong and the brain surgeon convincing his team that blood was in fact blue…. Perhaps they were all trying to throw the game after all! 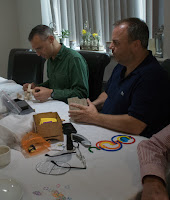 More puzzling followed – including a group solve of my new Mr Puzzle puzzle – that I’ve still got virtually nowhere on – they avoided doing anything useful anywhere near me, but they did manage to take it apart and then left Louis to just put it back together again… which subsequently took him more than an hour. I am suitably worried that it may never come apart in my paws.

I did manage to slay Ice 9 after a suitable battle – that thing is mean!

Shane had a pretty good go at Felix Ure’s Titan – but didn’t quite manage to get all the way through it – probably just to make me feel slightly less bad about my almost total lack of progress! Thanks mate!

I crashed somewhere around midnight, leaving the stalwarts still furiously puzzling… including the one-who-should-be-jet-lagged.

Nick left at sparrow’s next morning to grab a train to the airport and a flight to Frankfurt for the World Puzzle Championships – where his USA team won first spot the following week – WELL DONE! 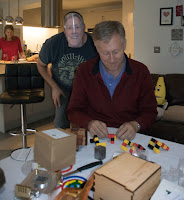 We rose at a slightly more sensible hour and feasted on plenty of full-English goodness before heading out for a bit of escape rooming… the two couples and the two newbies succeeded in escaping from Alcatraz – albeit we needed a couple of clues, got lucky with a badly placed padlock and wasted a LOT of time on some of the red herrings spread around the room(s). We did a lot less well on The Revenants room – needing lots of help – and we still went slightly over the hour – that one was hard work! I’m glad we listened to the others who’d done The Revenants room first and asked for help early on… we wouldn’t have come close otherwise!

After the escape rooms we all headed our separate ways – Louis found a plane back to AMS, Gill and I headed off toward the motorway where we met up with the London boys at the same motorway services we saw them at last year – we’d all earned a burger and chips by then!

Another fantastic time with friends and puzzles, way too much good food, lots of belly laughs – I’d say it was another excellent Northern Puzzle Party.