When Eric says he’s planning a series of small boxes, he doesn’t hang about! 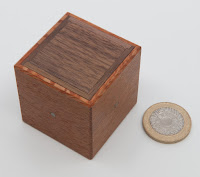 Somehow Eric manages to keep the price point really attractive in spite of the huge amount of work that must go into these finely crafted little boxes… they really are an excellent testament to this man’s mastery of his craft.


Nope Box - Small Box #3
It’s pretty simple to find some movement to explore on this one, although the next step is a little more elusive – that requires a little experimentation and thinking out of the box. Once you find it, though, all of your puzzling senses will tell you that you’re pretty much done – only you’re greeted with a solid wall of “Nope!” – guess where this puzzle gets its name from?
I think it’s fair to say that things get interesting from there onwards, with very little behaving the way you expect it to.
I expect this one will surprise and amuse even the most jaundiced of puzzlists out there. 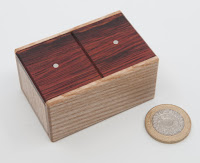 Paradox Box - Small Box #4
There’s an obvious top to this box, and it moves – which is always a great start! What’s even better is that when it moves, it allows another panel to move – this is going to be simple?
Eh, naw. It’s not. Everything stops there.
Try something different? Exactly the same degree of teasing progress and then a solid brick wall.
Settle down and think(c) just a little… OK, maybe a little more…
The “A-Ha!” breakthrough on this puzzle is terrific!
I find puzzles that yield to deduction very gratifying – and this one is sublime in that regard. 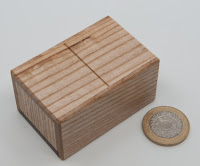 Don’t let this little guy lull you into a false sense of “this little thing will be simple” – it’s kept one or two of my most experienced puzzling pals locked out for weeks… it IS a wonderfully elegant little puzzle that has been superbly crafted – and that’s part of the reason why it’s such a fiendish little puzzle.
The Small box series is a definite hit with this puzzlist!