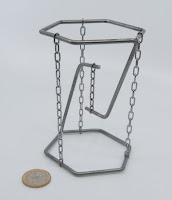 I was, and I don’t have the skills or the patience for bending long bits of rod into some rather precise shapes, so I sent him some PayPal and he posted me this neat little creation.

The hexagons each have a protruding hook and four bits of chain hold up(!) the uppermost piece… but it doesn’t quite look like it should work.

(Just think about that – a chain pushing something up…) 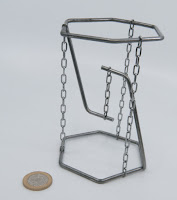 Your brain tells you that the whole thing should really just collapse if it were obeying the rules of the universe… and yet it’s quite stable, and can support objects placed on the uppermost piece. (The rods are neatly notched to keep the chains in the right place too – nice job!)

I quite like having little things like this dotted around the Puzzle Cave to make visitors think a bit – everyone always works it out quite quickly, but the glint in the eye when they first see it and you can almost hear them saying to themselves “Hang on a minute…”, is priceless.


Thanks, Michel, for giving me a little bit of impossible for the Puzzle Cave.