A couple more boxes from the designs for the Karakuri Experiments exhibition, this time from Kamei and Kawashima-san. These two are probably a bit more mainstream and traditional than the ones in the previous Karakuri post, but most definitely worth playing with. 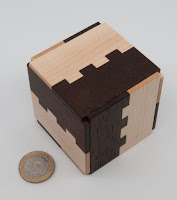 Twin 5 is Kawashima-san’s fifth Twin box and takes inspiration from Kamei’s 1983 Top Box. The family resemblance to the other Twins is clear to see and the reference to one of Kamei’s classics might help the intrepid solver… I guess.

Start fiddling around with this one and it shouldn’t take you long to find one or two interesting things to do… but then, if you’re anything like me, you hit an absolute brick wall and can’t find any way to proceed. 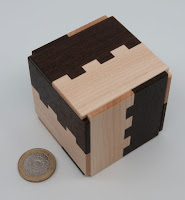 I spent quite a while here, going back over the few moves I’d discovered and trying to find anything at all interesting to do along the way… and failing miserably.

I began exploring some seriously whacky theories, all to no avail. I tried some of the older tricks from this terrific craftsman’s previous puzzles – nada!

Kawashima-san says this box “requires very few steps, so even beginners can enjoy it” – and he ain’t kidding… and part of me wonders if beginners might even solve this one quicker that well-seasoned puzzlers.

Kamei’s contribution to the exhibition was Maze Box – almost certainly a clue to the mechanism, right? (Sort of - it turns out it's a refence to another of his 1983 creations...)

The top of the box has a distinctive inlaid daisy, or Margaret / Marguerite flower that really sets this box apart – someone’s gone to a lot of trouble on this one.

Strangely the box come with three little dowels, which seem to match up with the six holes in the bottom of the box… although exactly how useful either of those two discoveries is, remains to be seen. 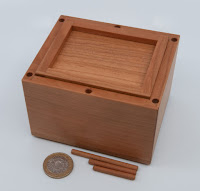 Once again, I spent a while exploring several fruitless avenues before thinking something along the lines of “It couldn’t really be that elegant, could it?”

This one will definitely leave you scratching your head over the mechanism that locks this puzzle up. I’m sure that there’s a relatively straight-forward approach that I just haven’t thought of yet, but I’m probably going to carry on believing that there are little fairies inside the box that release the locks when they sense that you’ve done all of the things you’re supposed to do – it really seems magical.