Henry Segerman has been designing puzzles and wonderfully interesting 3D-printed mathematical structures for a while now. He recently shared a video of a new sort of maze he’d designed which uses an interesting property of moving something around the surface of a three-dimensional ball-like object: moving around in a closed loop on the surface changes the orientation of that thing relative to the ball… which is interesting, as Laurie always used to say. That property is called holonomy and Henry’s mazes use that property to make traversing the maze depend not only on where you are, but how you got there…

The first two mazes he published on Shapeways were based on octahedral geometry projected onto a ball. The shuttle, which he calls a rook based on the shape of its foot that engages in the maze, starts in one place in a forced orientation thanks to the little projections either side of the insertion hole… the object is to return to that starting point in a different orientation so that one of the rook’s arms is trapped under the overhanging lip on one of those starting projections.

Travelling around the surface, every time you take the rook around one of the triangles on the surface, it rotates 90 degrees – which is helpful, because there are a bunch of pegs on the surface of the balls that will stop your progress depending on which way round the rook is positioned…  so your task is to find a permissible route around the ball that takes you back to the start, but gets you there in the right orientation – see, it doesn’t just matter where you end up, but it also depends on how you got there… nice! [Henry does a much better job of explaining all that than I do - watch his videos!]

Right – that’s the theory – how do they play?

The first two Holonomy Mazes Henry released were octahedral, as I’ve said - that gives us 24 possible nodes if we were to graph them and definitely provide a non-trivial little puzzle. There isn’t all that much space on the ball, so you never really feel like you’re lost – it’s always just a case of working out which routes are currently available and whether you want to go straight toward your goal of via a detour or three to change orientations.

The mazes and rooks are cleverly designed to allow only the valid moves and after an initial bit of playing any roughness on the prints is smoothed away… I quite like these little mazes because despite having such a small physical area, they provide a neat little challenge. 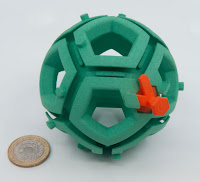 A few weeks later Henry presented his Dodecahedral Holonomy Mazes so I had to give those a bash as well. This time you have 120 nodes potentially available (before the pegs begin to limit that space) and a circuit of any one of the pentagons will translate the rook by 60 degrees this time… where the smaller mazes feel like they should be simple, the dodecahedral ones feels a lot more complex, at least to me they do – and watching the videos where Henry describes the process of deciding which mazes would be interesting, I’m not surprised – he’s deliberately chosen layouts that have lots of spaces where a puzzler can easily run around in circles for a while (yup, I’ve got the t-shirt!) and also have some bottlenecks in the middle so if you don’t pick the right path at the right time, you’re doomed to wander around in those almost-closed loops.

These puzzles are not only fun to play, they’re also interesting for how make use of such a relatively small space while producing interesting, non-trivial puzzles. 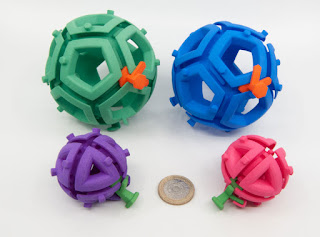