I got a copy of Boxed LUV, a.k.a  Four Blocks in a Box or simply Coffin #189 from Tom Lensch after I dropped him a random email asking him if he, by any chance, had any stock of a few things listed as out of stock on his web-site – I know it’s a bit rude, but sometimes web-sites can be out of date, or folks might just have a couple of spare puzzles lying around for sale, you never know!
He came back and let me know that he had a couple of Coffin puzzles available – one of which was Boxed LUV – I’d vaguely remembered having seen a packing puzzle by that name somewhere in the dim and distant past, so I took one (and a Four Fit and a 4-piece serially interlocking cube, but that’s another blog post altogether!). 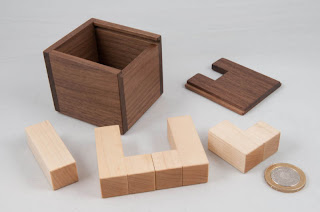 I received this package o’ puzzles a couple of weeks before MPP2  and set about trying to solve them – but this one, evaded all attempts at solution. It seems so simple – it’s what I call an ‘honest’ puzzle: there’s nothing sneakily hidden or disguised, it’s all out there in plain view all the time. It’s a simple walnut box with a slide-on lid which helpfully has a hole cut out of it the same size as the standard cross-section of the pieces – that should be handy... inside the box are four maple pieces that make up the letters LUV (actually there’s a 3*1 cube stick, a pair of “L”-shaped 3*1*2 pieces and a “V”-shape made up of 3 joined cubes). I said this was an honest puzzle and you can quickly confirm (I sense you’re the sceptical sort, since you’re reading this!) that the cubes making up the pieces are identical and square – no funny business here!
OK, so it’s easy – put the pieces in the box, so that you can (easily!) close the lid – they’ve even left a window in the lid so you can have stuff peaking out if you like – this should be simple...
...and yet, in two weeks, I got nowhere! Actually that’s not quite true. In two weeks I did manage to find an awful lot of ways to not solve this puzzle ... in my defence, several came close, some would even ‘allow’ you to force the lid closed (while scoring lines in the inside of the lid!), some would have things sticking out of the window at strange angles, but none of them could really be called a solution. The size of the box is positively fiendish - effectively stopping all sensible ideas from working! 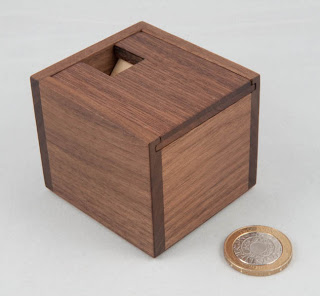 So when I had a puzzler-of-note staying over for the weekend, Gill and I hatched a plan – we would threaten not to feed Louis until he solved the Boxed LUV and put me out of my misery. In the end we forgot to issue the threat, but he did take up the challenge and managed to solve it in way less time than I’d wasted on it ... to be fair, it did take the puzzle-meister-of-note a good couple of hours, but he had succeeded where I had failed, somewhat dismally!
The solution is very elegant and makes a mockery of all the rules your brain tries to impose in order to pack these oddly shaped pieces efficiently into the box – and don’t get me started on the biggest red-herring of all!
This puzzle quite quickly became one of my favourite “Give it to the non-puzzlers”-puzzles, not only because it’s pretty hardy and can withstand even an angry teenager, but also because once folks have played with it for a while, they are usually absolutely convinced that it's physically impossible to get those four simple blocks inside that box ... until you show them ...
Posted by allard at 16:48