It happens to the best of us, sometime ... you give someone a puzzle to play with and something happens and the next thing you know you have too many pieces and a far easier puzzle to solve!
Someone was playing with my copy of FourFit a couple of days ago and after playing with it for a while (but not quite long enough, IMHO) they announced that they had solved it, across the room, so I wandered across and looked at the solution proposed and what struck me immediately was that there was a piece, squarely in the corner (and yes, that’s partly a give-away!) that I didn’t recognise. 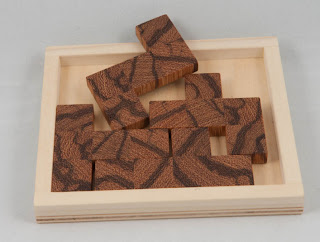 Now FourFit, for those of you who haven’t been introduced to this little Coffin-gem is a simple little tray packing puzzle that consists of, wait for it, Four pieces – hence the name... what I was looking at had five pieces neatly arranged inside the confines of the tray – see, solved – sort of ... anyway, then I had to explain that there were only supposed to be four pieces and that one of them seemed to have been re-kitted into two bits – although, in fairness, that did make the puzzle a lot more “accessible”. 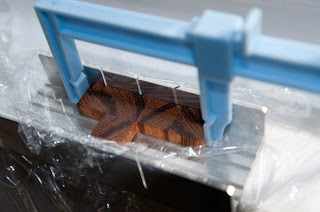 All of which is a rather long story to get to the real point ... fixing puzzle pieces ... I get to do this from time to time (and sometimes I might even be able to blame others!) ... so how does a puzzler go about repairing broken bits ... mainly, a bit of wood glue and a lot patience – but most importantly you need a way of keeping the bits (that should be) straight – so most recently that involves a couple of plastic clamps and an aluminium channel from my model-building days – and that was doing quite well at holding these two parts of a FourFit bit, until I realised I needed something small and heavy to lay on top of the bits while they dried to keep them flat – so I cast an eye around the room and find just the thing – I’m sure every one of you would have done the same thing – I used the Popplock T2 to weight it down – no way is that thing not going to be flat now... :-) 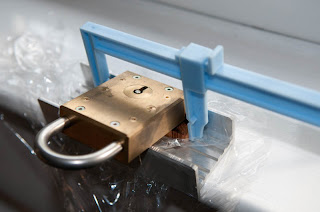