Wil Strijbos sent out another of his famous emails recently announcing that he’d had a few items made up in case anyone was interested – my response was meant to be “I’ll take one of each, thanks” but I wasn’t paying enough attention and missed the fact that there were two variants of the impossible dovetail on offer ... any-hoo, the latest box of tricks duly arrived with a dovetail, a bolt and a Jugo Flower…


While I was waiting for the parcel to arrive, Wil had asked for some help on some words of warning on the handling of the Jugo Flower because the mechanism can be damaged if not treated properly - so I’d had a bash at it before I received mine and then added some further bits to it after I’d had a bit of a play with it. 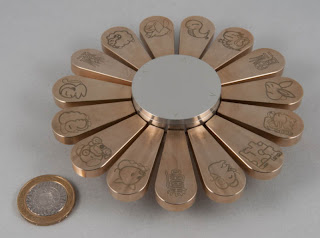 So, courtesy of myself, the object of the Jugo Flower is to turn all the petals over, and then return the puzzle to the starting position – there are fifteen brass petals radiating out from an aluminium centre – said centre has four arrows marked on it (at positions 4,6,11 and 14 if you’re interested, although you’ll realise that the only interesting thing is the size of the gaps between them) and the petals opposite the arrows can be twisted and flipped over – all together (no differential), and while the petals are all horizontal, the petals can be turned around the centre, effectively moving the four arrows around – got it?
Just after I’d received my puzzle, Wil asked if I’d mind putting something on my blog about it, and of course I agreed (potentially he holds my sanity in his hands, best be nice to him!) – so here you are:
First thoughts – it’s a really nicely made version, beautifully machined and mechanically fairly sturdy – yes, you need to make sure that things are lined up and all flat before you turn the petals around the centre (they jam if you don’t), but other than that, it behaves exactly as expected. [Ali, one of my puzzle-mates, helpfully suggested resting the puzzle on a large roll of sticky tape to get everything properly horizontal. Great idea! ] The petals all have pictograms representing Chinese signs of the Zodiac (Thanks to Jerry for pointing that out!) etched on one side and are milled out on the reverse – so there’s a distinct difference between the two sides... 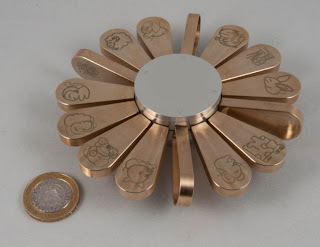 While I was waiting for the puzzle to arrive, I did a little Googling and found that the Jugo Flowers (or “Game Jugo”) have been mentioned several times on the TwistyPuzzles.com Forum.
There’s a discussion on TwistyPuzzles.com in February this year that mentions it as one of the rarest puzzles around with an initial sample run of some 7 puzzles produced ... I suspect that Wil might be helping to solve that ‘problem’.
Tony Delgado mentions the Jugo Flower in his interesting column on the “Game Set Watch” site about “Lights Out”-type puzzles over here.
…and then I found a link to some beautiful photo’s of a couple of examples from Hendrik Haak’s collection over here.
Finally, there are some discussions of the Jugo Flower on the TwistyPuzzles.com Forum in 2004, some of them involving discussions about an example that one Wil Strijbos had been showing some folks at a Dutch Cubing Day ... and some analysis by Jaap Scherphuis – including a comment that he’d mentioned to Wil that it was a pity that it could not be placed in the position that all of the petals had been turned over ... (Hang on!)
Which got me thinking (yes, it was painful!) ... perhaps I’ve led (a tiny part of) the puzzling world astray by suggesting that the aim is to turn all of the petals over – whereas in fact the aim should be to mess them up and return them all to a face up position ... which given the combinations of petals linked together, is possibly challenge enough. 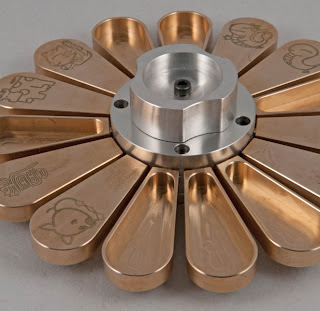 Here’s my logic: petals can be up or down – it’s binary (there’s no differential gearing remember, and you can’t move the petals unless they’re all horizontal), the order of flipping doesn’t matter (‘cos it’s binary) just which sets of four petals you flip in any group of moves (i.e. for any set of moves the order doesn’t affect the end-state), you’re always going to flip four petals at a time – which in turn means that you will ALWAYS have an even number of petals faced down – and fifteen isn’t an even number ... end of, or QED if you’re Latin.
(Jaap uses some far more rigorous maths incorporating what looks like group theory and matrices to prove some general cases and then merely refers to some of the rules that he’s proved to show that it’s not possible – in his own words: “I have since worked out that of the 2^15 seemingly possible states, only 2^12 are achievable. The quiet patterns are the 2^3 that have 5-fold symmetry.” – Sorry, it’s been a while since I was able to do any of that sort of really clever stuff – you’re best off reading his pages over here.)
I did go through a phase in the middle of that little journey where I had convinced myself that there must be something mechanical in the puzzle that allows an ‘unusual’ move somehow and explored all of the possibilities that I could think of, and couldn’t find anything suitable, so I’ve settled on the analysis above … and to my mind it sort-of fits in with my email exchanges with Wil so far and ties in with what I’ve read on the TwistyPuzzles.com Forum (and most importantly, Jaap’s proof sounds very convincing to a neophyte!).
If I’m wrong, hopefully Wil or another (better) puzzler will be in touch shortly and humiliate me publicly! :-) 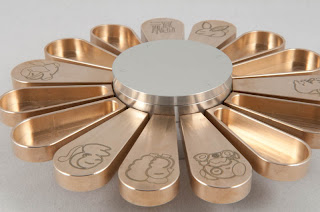 ... but in the mean time, I think it’s a really nicely made reproduction of an extremely rare puzzle – it’s not “too hard” and should be accessible to most puzzlers – the concept is really simple to explain and solutions can be quite puzzling as the “just-before-the-end” state is asymmetric and not immediately obvious, allowing you easily walk right past it, figuratively speaking.
Really glad to have one in my collection, but suspect that it’s going to appeal more to collectors than to casual puzzlers!
Posted by allard at 19:26