A few months ago I bored you with a tale of buying up a strange lot of Stickman paraphernalia from the Australian Disaster Relief puzzle auction held at Puzzle Paradise.  At the time I was trying to make a point about the kindness of puzzlers – you can be the judge of whether I succeeded or not.


This post carries on where that one left off ... but first, let’s recap a bit: the auction lot contained some sundry Stickman bits and pieces that John Devost had lying around (as one does, apparently!). There was a signed copy of Robert’s book, a pair of Stickman running gloves (you need gloves for running?!) an unnamed box (that I’ll be able to write about some time in the future...) and most of the bits to assemble a Chopstick Box, including a few prototype chopsticks.

Robert had lined John up to design and make the chopsticks for these boxes and had shipped him a partially assembled Chopstick Box to use as a prototype. [Yes, there’s a fair amount of ‘interaction’ between box and chopsticks, so that’s important!] Having produced the required chopsticks, said box was consigned to storage and forgotten about for a while – until John went rooting around for stuff to put up for sale to raise some cash for his mate Dave Cooper who’d been hit by the latest round of flooding in Australia.

Jump forward a month or so and I’m staring at a pile of pieces of box and three chopsticks – nae clue!

Several emails backwards and forwards with the Stickman himself and Robert’s explained how the box works, taught me what that thin white wood is (maple veneer, numpty!), established that I need another chopstick (three of the four in the package weren’t ‘gimmicked’) and then sent me not only the required chopstick and an instruction sheet, but also two small sheets of maple veneer (more than enough!).

It takes me a while to work up the courage to do anything to the bits so they stare at me from the shelf next to the PC for quite a while before I suck up enough courage to have a go at cleaning up the various bits and pieces – some of the veneer has come adrift, so I use a single edged blade to strip the rest of it off and scrape off the remains of the glue – rough it up a bit and then glue the veneer to the top and bottom pieces, putting them between two granite tiles on the bench and piling everything heavy I can find in the garage on top of it ... and leave them alone for a few days. 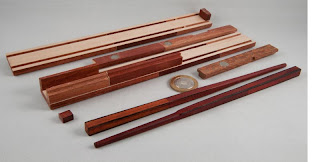 The results don’t look too bad so a little while later I’m taking my trusty Swann & Morton #23 to it in order to slice off the excess veneer and remove it from the channels for the sides to slot into. That doesn’t go too badly although I suspect that using a table saw to do that would probably be a much better idea –although I can’t really justify buying a table saw to assemble this box(!).

From there the sides need a bit of attention – particularly around the fit into those channels on the top and bottom – mainly scraping off traces of glue to make sure that they are properly seated. At this point the box can be assembled and held together with masking tape and a rubber band or two and I spend ages fiddling with the chopsticks – in and out of the box – again and again – seeing them flick into place and then pop out is really cute and puts a fat smile on my face – I realise that I’m going to have to finish this off nicely, but then I chicken out and leave it that way for a couple of months, dreading the act of gluing it together in case I mess it up. (IMHO that would be sacrilege!)

Roll forward to a holiday weekend and I take the bits out and check the fit, work out what needs to be glued where and in which order and, heartened by seeing Neil’s video of Scott Peterson’s glue-up process, I have a go ... glue the sides to the bottom, pushing them firmly into place, spread a tiny bit of glue (an important lesson from Scott in that video!) along the tops and then put the top in place, making sure that everything is carefully aligned and then clamp it in the bench overnight. 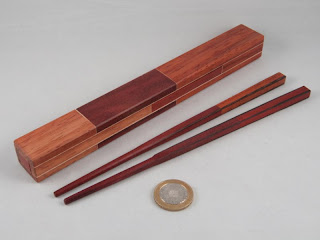 Next morning it actually resembles a box! Take off some of the rough edges with an orbital sander using the finest grit it’s got, then spend a while removing the remaining sanding lines with some insanely fine sandpaper – once it’s all nice and smooth (really smooth!) clean up all the dust and head indoors to apply some Renaissance Wax – and that really brings the wood alive!

Get the chopsticks out and insert the first one and it gets sucked neatly into place, ditto the second. Fat smile re-emerges. Do the first move and the box spits out chopstick number one in a moderately magical manner – remove it and fiddle around a little and then the box presents chopstick number two for removal – lovely ... and I didn’t screw it up!

On the whole I’m very  chuffed with how it turned out – I know that it’s nowhere near Robert’s standards of finishing and it’s not an official Stickman Chopstick Box, but I love it! Thanks to John for parting with the bits and to Robert for telling me what to do with them(!) and then supplying the essential extras. 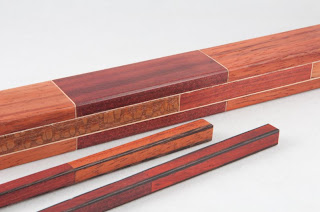