The first time I met Confusio was at MPP2, when Louis brought a recently purchased copy across the channel for our amusement. After a bit of tugging and prodding I managed to extract a few pieces and then managed to systematically demolish it, safe in the knowledge that I’d be able to build it in Burr Tools and reassemble it again. 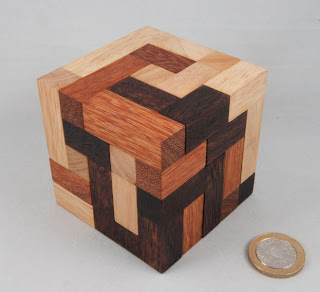 Handily, Louis was keen to see a demo of Burr Tools, so we set about building the pieces and asking it to solve the puzzle – only to have it wander off into the distance to think, and never return. Now in fairness, I’m pretty sure that I’d somehow managed to confuse the software to the extent that it tied itself in knots and went off to sulk, but for the life of me, I couldn’t coax it into providing a solution while Louis was there, so he ended up having to show me how to reassemble Confusio – demonstrating that he’s a better puzzler than me and my PC put together. (No surprises there, then!)

At the next MPP Louis presented me with my own copy of the Confusio, courtesy of the assembled masses as a thanks for hosting another MPP – gee, thanks! My very own copy of the puzzle that demonstrably bested me last time around – nice bunch, eh?

In a quiet moment after that MPP I found I really enjoyed playing around with Confusio – it’s a 9-piece 5*5*5 cube with no internal voids. Each piece is made in a different colour wood and the interaction between pieces is quite impressive. While the very first piece can simply be removed (once you’ve identified it!), most of the remaining pieces require a couple of moves each in order to release the next bit - something that makes reassembly considerably more complicated as you’re sometimes adding a couple of interlocked bits at a time and having to manoeuvre them into position in the right order. As a result, even lining up the pieces in the order that they’re removed in order to ease reassembly, produces a non-trivial problem. 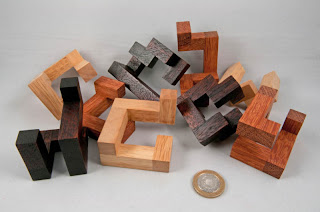 After playing around with it and getting the hang of Confusio I fired up a new copy of Burr Tools and built up the individual pieces afresh and set it to solving the puzzle – this time it flashed through the process and confirmed the single solution, allowing me to step through the animated assembly process. (The combination of a new version of this terrific software, and me not doing something stupid, resulted in success this time around, Louis.)

Given the level of ‘interaction’ between the pieces and the complexity of their shapes, I suspect that presented with just the pieces and being challenged to build a cube, I’d be busy for quite some time – and possibly not prevail.

Really nice design from George Pfaffinger, neatly manufactured by Philos, available from quite a few respectable puzzle shops … thanks guys, I did enjoy it in the end!
Posted by allard at 18:36