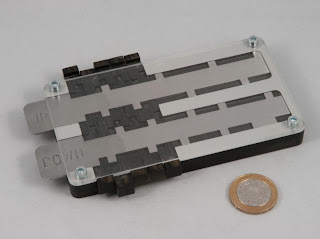 I noticed this puzzle in the Cubic Dissections Gallery a while ago, so when Robrecht’s 4-Steps Visible Lock won this year’s Jury Grand Prize at the Nob Yoshigahara Puzzle Design Competition in Berlin, I decided that was as good an excuse as any to try and get hold of a copy. Wil Strijbos sent an email around offering some 4-Steps for sale, so I followed up with an email asking if he happened to have any of the earlier ones, particularly the Cerradura Doble, available for sale. Turns out he managed to find one for me and the package was practically on its way before I’d even had a chance to pay for the puzzles – Wil’s fiercely efficient at these sort of things!

I hadn’t paid a lot of attention to the dimensions of the puzzle when I’d seen it in the Cubic Gallery, but when I unwrapped it from its cocoon of zip-lock baggie and well-taped bubble wrap (Wil wraps well too!) it struck me as bigger than I’d expected – making for a pleasant size and weight – and something handy to throw at an intruder, if the need ever presents itself.

A clear piece of acrylic keeps everything together and visible: there are a pair of steel keys marked “UP” and “DOWN” that move in and out of two milled channels in the base and a set of 5 sliders with unique combinations of notches that interfere with the bumps on the steel keys. Your aim is to remove the steel keys by playing with the 5 sliders.

My approach to these sort of puzzles is rather agricultural, not particularly efficient, but generally results in a fairly decent outcome – it also results in a fair amount of play-time per puzzle, which after all, is what it’s all about anyway, in my books.

So I pick one of the keys to focus on and fiddle around with the sliders to get that key as far out as I can … invariably getting to the point where progress is blocked by things that can only be resolved by moving the other key, so switch attention to that one, getting it as far out as possible, until it too is blocked unless the first key moves, repeat until solved. 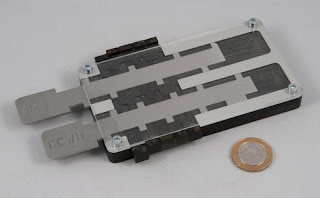 Every now and then you’ll find that you’ll need to backtrack a bit in order to get things freed up a bit, but that’s a small price to pay for a fairly simple approach.

From memory I think I had to backtrack a few times, but not by a huge amount.

The sliders are nicely made and movements on all pieces are smooth and positive – if it looks like it should move, it will, making it a very satisfying puzzle to play around with.

The supplied solution lists a total of 80 steps to completely remove both keys, and I’m guessing that follows the most efficient route possible for the standard starting position. I didn’t feel that my agricultural solution was significantly longer than that, so perhaps Robrecht has been kind to people who adopt my sort of approach of muddling around and only going backwards when they absolutely have to – I can imagine that a less well-intentioned designer could plant some horrible dead ends where the ideal solution was actually rather short, but that the solution would lengthen significantly if you used a strategy of pursuing each key individually until it becomes irretrievably blocked … don't you dare get any ideas! 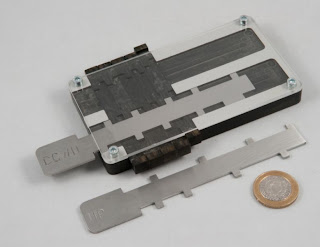 I haven’t played around with the idea yet, but it looks as through the keys could be swapped and / or flipped, and removing the acrylic plate would enable one to scramble the keys – which might present some different challenges … something to experiment on in the future…

Overall, a really nice, well made puzzle with a satisfying solution – not too complex, definitely accessible for most … nice one!