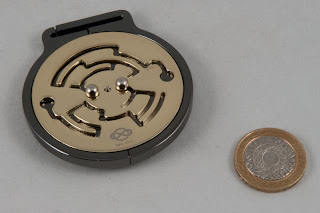 As far as I can tell, this puzzle started out life known as 4D, when it was Oskar van Deventer’s self-designed exchange puzzle at IPP23 in Chicago. More recently, since January 2010, a slight variation has been available under the name Medal in Oskar’s Shapeways store. I remember spotting it in the Shapeways store while I was randomly exploring Oskar’s puzzles and thinking that it looked like an interesting puzzle, so I was rather delighted when my latest little order from Wil arrived with Louis when he came across for MPP3, and Wil had include a cast metal version of Oskar’s Maze Medal in lieu of the postage he’d saved by having Louis carry the puzzles across the channel. Everyone’s a winner!!

The puzzle came in a Hanayama-style box, but the colours and branding looked a bit strange and on closer inspection, it bears the logo of the International Maths Olympiad – it seems that Hanayama have manufactured a bunch of these to be used as prizes or gifts for folks competing in the recent annual International Maths Olympiad held in Amsterdam – rather fitting since when assembled they resemble a medal to be hung from a ribbon, and handily they’re gold on one side and silver on t’other.

The puzzle is quite striking with the shiny gold and silver disks on opposite sides sandwiching a pair of black frames that each have a pair of pins to engage the mazes. The aim is to navigate to the end of both mazes in order to release the disks from the frames. 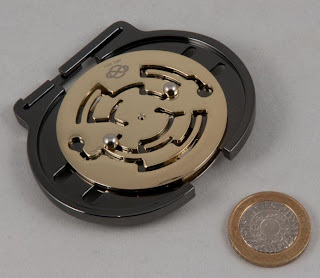 Navigating through the mazes is a combination of rotating the two disks independently to move around on an arc, and sliding the black frames in and out to move between arcs. Your movements are constrained by having to be at the same (in /out) depth front and back on each side (because the two pins on each black frame are opposite one another).

It’s a lovely puzzle to sit and fiddle with – in common with almost all of the Hanayama cast puzzles, it feels solid and really well made and looks quite handsome to boot. All legal moves are smooth and clear and generally if you’re finding that a move won’t work the way you’re expecting, there’s something on the other side blocking you (because the disks spin quite freely, depending on how you choose to hold the puzzle, flipping it over can sometimes nudge a disk and block your move unintentionally).

Fairly soon after I got it I managed to navigate all the way to the ends of the mazes, but couldn’t quite get it to release, so thinking that the two sides must release separately, I wandered off down a rabbit-hole and spent a while trying to navigate to each end of the maze individually… at some point I took a more careful look at the mazes and realised that the only place where you can expand the black frames that final little bit, was at the respective exits, so blitzed through the mazes and positioned both just about at the end and gave the frames a more solid tug than I had last time, and this time they parted, parking the respective mazes in their open position and allowing the puzzle to be dismantled. 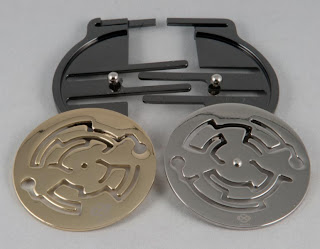 I reckon it’s an intermediate level puzzle that should amuse puzzlers for a little while without scaring off non-puzzlers, who seem to enjoy fiddling around and exploring the mazes…


In case you’re interested, there seem to be a couple of subtly different brandings of this puzzle around: I’ve spotted that Puzzlemaster has them for sale and that their stock is Puzzlemaster-branded (instead of being IMO-branded), whereas the ones available from Sloyd are branded “Cast Puzzle”.
Posted by allard at 20:00