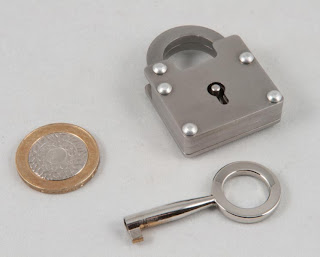 Rainer Popp has been making puzzle locks for a good few years now and I’ve been a fan of them ever since I first stumbled across the T2 over at Grand Illusions. To date they’ve generally been machined from solid chunks of brass, making them large, heavy, and sadly, rather expensive. It seems that quite a few people have been onto Rainer and asked him to consider making something a bit smaller and a bit cheaper … and he’s listened, and recently produced the T6. It’s significantly smaller than its predecessors, but does it fit in with the rest of the Popplock family?

To be honest, I was a bit worried that the T6 might not live up to its illustrious predecessors when I ordered it from Grand Illusions. Rainer has done an excellent job of establishing his locks as superbly manufactured, clever puzzles – the worst thing he could do now would be to cheapen that by putting his name to a simple puzzle that hadn’t been all that well made … it turns out that Rainer gets all that, and he’s managed to produce a great puzzle in an affordable package. 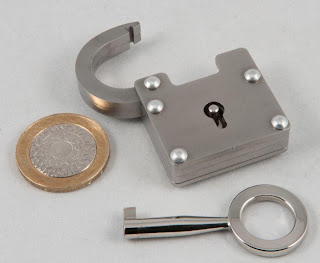 The T6 is a medium-sized padlock that comes with a fairly simple-looking key. Inserting and turning the key does not apparently unlock the padlock, however (but it’s always worth a try!). It may be smaller and lighter than its siblings, but the T6 is still a pretty solid little lock, and in common with all of the others in the range, it could certainly be used as a pretty secure lock.

At first blush, there’s not a lot that you can do with the T6 – the key goes in, turns around, in either direction, and comes out. There’s nothing interesting in the rivets (you know that you’re going to try and move them, admit it!) and although the body and hasp appear to be made up chiefly of a pair of thick steel plates, they won’t budge – pushing and tugging various bits randomly also teaches you absolutely nothing … Hmm, I’m liking this puzzle already! 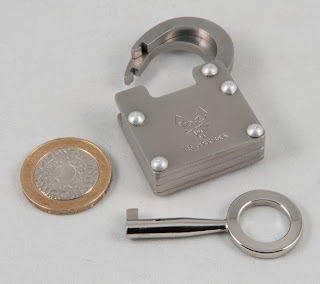 It takes a pretty beady eye to notice a little clue that Rainer has helpfully left, almost in plain view – and then a little experimentation to establish that it might be interesting … especially when it jolly vanishes! From there it’s a hop, skip and a (rather large) jump through the 6 steps (by my count) required to open the lock – and as with quite a few of its siblings, the final step is really unexpected and more than a little unusual. (i.e. Vintage Rainer Popp!)

It may be smaller, lighter and more affordable than all of the other Popplocks, but it’s well and truly worthy of the family name – a very welcome addition to the line of Popplocks. Great design Rainer!

At least two other renowned puzzle bloggers have written about their experiences with the T6 – you can read about Neil’s perspective here, and Oli’s over here.
Posted by allard at 16:50