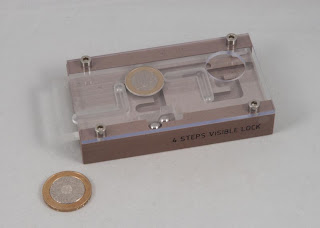 Robrecht Louage has been entering the Puzzle Design Competition for the last few years. His distinctive style of puzzles are made in hard-wearing materials (like corian, acrylic and steel) so they not only feel like good quality puzzles in the hand, but you know they’re going to last for ages, even in the hands of amateurs like me!

Robrecht’s previous entries in the Puzzle Design Competition were:

This year his 4-Steps Visible Lock was a popular winner of the Jury Grand Prize, and the name pretty much says it all! There’s a coin trapped in a slider that has a series of locks in the form of interfering steel balls (and some other stuff) to be negotiated.

Most of the mechanism is on view all the way through the process – covered only by a sheet of clear acrylic – there a couple of delightfully deceitful elements in the puzzle that crop up at the start and at the end of the solution which may just have you doubting whether seeing really is believing. 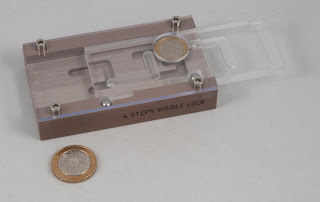 The solution involves working your way through 4 separate steps (the name is quite descriptive and helpful after all!) – the first one is quite neatly disguised and needs a bit of careful investigation to find, if you aren’t lucky enough to spot it right off the bat – it’s a reasonably common sort of mechanism and the “usual approach” will defeat it.

Next up is a pair of steps involving interfering ball bearings that need to be in the right place to allow progress – these are the bits that are always in full view and behave as you’d expect, without being overly fiddly … which leaves the last little lock to defeat – and this one’s cute! It’s staring you in the face the whole time, sort of, but it’s beautifully hidden all the same.

If you’re in any way a serious puzzler, it won’t take you very long to solve this puzzle, but you will enjoy it! And I suspect that’s why it won this year’s Jury Grand Prize – it’s not too challenging but is very enjoyable.

My copy came courtesy of Wil Strijbos, and I suspect that Robrecht might have some available as well - there's a link to his email address off the Puzzle Design Competition website. There's also a rumour that Eric might be offering some on Cubic Dissections in the near future as well.

You can read Jerry’s take on the 4-Steps Visible Lock over here.
Posted by allard at 17:56