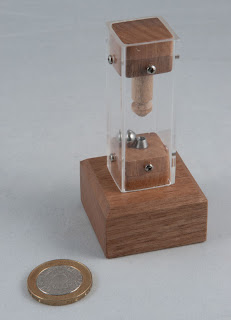 There’s a particular puzzle in Brian Young’s Opening Bat sequential discovery puzzle that is absolutely mind-blowing. I’d never come across anything quite like it before and the sense of achievement solving it produced was phenomenal. Now a large measure of the difficulty and the resultant sense of achievement come from the fact that the entire mechanism for that lock is hidden from view – you’re having to deduce what’s in there, how it works and how to defeat it.

Brian recognised that this idea was an absolute gem and set about turning it into the guts of his own exchange puzzle for IPP31 in Berlin this year – and that’s where Houdini’s Torture Cell came from.

Soon after Brian and Sue returned from their holidays (and a trip to IPP in Berlin) they listed a number of IPP puzzles that Brian had had a hand in creating at Mr Puzzle – it didn’t take long to spot and send off an order for a few interesting little items, and knowing what I did about the Opening Bat, I wasn’t going to pass up on getting a copy of Houdini’s Torture cell.

It’s a cute looking puzzle with Houdini’s torso and head hanging down from the top of the acrylic torture cell and some perilous-looking metalwork perched beneath his noggin. The object is to release Houdini from his cell, trouble is that the top and bottom of the cell appear pretty much screwed shut, so unless Brian’s cunningly concealed a Philips screwdriver in there somewhere ...

A little playing around with the puzzle will quickly show you that the cell swivels on the base, and in fact will come free of the base – and that’s a useful start, but there’s still a long way to go...

Brian bills this puzzle as a sequential discovery puzzle and it really is, albeit on a slightly less grand scale than his Opening Bat! There are several little discoveries along the way to keep you not only amused, but aware that you’re on the right path. He’s changed it a little bit from the version in the Opening Bat, and if anything made one of the earlier steps a little more difficult, but you can actually see what you’re doing here, so that’s only fair!

It’s a great little puzzle that gives you something impossible when you start and something magical when you finish – it’s great to see that mechanism finding wider use – it really is simply too good to restrict to using it on only 50 copies of the Opening Bat.

It’s easy to see why Brian received “very positive feedback” about this one at IPP and then has folks like Wil Strijbos announcing it was his favourite exchange puzzle this year – it’s great!

[You can read about Oli's thoughts and experiences of the torture cell over here.]