Kagen Shaefer has been known in the puzzling community for quite a while as someone who creates puzzles with the most incredible finishes. A quick glance through his website brings up some gorgeous puzzle boxes going back a few years as well as a few rather puzzling bits of furniture more recently – including an absolutely epic desk that will only release its secrets when the right tune is played on the drawers along the top (the desk conceals an all-wooden pipe organ and a programmable (!) pneumatic logic board that tests the notes).

Earlier this year Kagen’s website announced that he’d be making a run of Diamond Boxes and after seeing a special version sold on the Puzzle Paradise Australian Relief auction earlier this year, I joined the queue for one. Two versions were going to be made and I opted for the budget version in Maple, foregoing the Lignum Vitae option.

A few months later the rather well packaged little beauty arrived in Barnt Green, whereupon Gill promptly intercepted it and hid it for two days until my birthday, making for a great surprise as I hadn’t realised it had arrived.

First impressions are that this is a really solid box and the finish is every bit as impressive as you might expect from Kagen’s reputation. Kagen describes the finish as one popular with makers of fine musical instruments and from the feel and sheen on the wood it’s hard to disagree. It really catches the light beautifully and seems alive – especially that curly maple on the base of the box.

The main feature of the box is the set of four triangular walnut plates on the top that frame a black diamond in the centre when it’s locked. A little manipulation magically changes the colour of the diamond from black to pink – even after you’ve done this a hundred times, it still looks magical. Kagen’s got the timing and the tolerances absolutely perfect on that switch from the Gabon Ebony across to the Pink Ivory wooden plate.

Once unlocked, the box opens in a fairly traditional manner revealing a pretty generous interior. All of the mechanics are neatly hidden away inside the beautifully finished lid that looks remarkably thin given the mechanics it hides. It’s all beautifully finished, even on the inside – with ebony slip feathers strengthening each of the corners. Kagen’s trademark branding, numbering and dating make a neat little feature of an integral part of the mechanism on the lid – neat touch.

While it’s not a particularly challenging puzzle box, it is an object of real beauty created by a craftsman who’s clearly on top of his game. Quite glad to have been able to add this one to the collection... 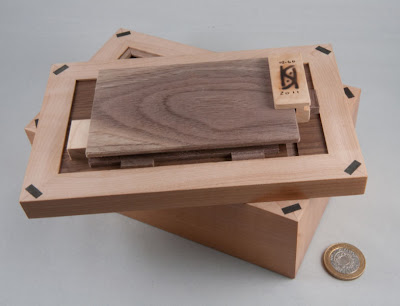 [There is a second little secret compartment that I haven’t mentioned – it’s not that hard to find, but it’s a neat little addition that might pass some folks by because they think they’ve solved everything already and stop looking ... and there’s probably a lesson in there... ]