(The day before the) Dutch Cube Day

Blogging on the (not quite so) high seas, again
– this time in the other direction!

The annual Dutch Cube Day has pretty much become a weekend affair, with the Dutch National Speed-cubing Championships being run over two days, and the Puzzle day taking place on the second day. This year the event was held in Eindhoven and judging by the turnout, it seems to be pretty popular with puzzlers in general, and cubers in particular.

Nigel flew into Eindhoven on Saturday morning and Louis picked him up from the airport and brought him into town. The three of us then spent a couple of hours wandering around the centre of Eindhoven seeing the sights before we headed for a (normal!) coffee shop for a long chat about puzzles in general and one or two that had stumped us at Wil’s place the night before – that Foshe lock came in for quite a bit more discussion, but very little new insight.  From there we wandered off to a toy store to pick up a few Dael-o-rings for ourselves and some puzzling buddies back in the UK before visiting the only gaming / puzzle shop around to acquire a couple of knick-knacks before the serious puzzle purchasing began later on.

Lunch was at Louis’ place with Mieke and the kids, who despite being only 4 and 6 respectively, were both keen to demonstrate their puzzling skills with a ball-shaped diagonal burr and a tangram set – it’s great to see the next-generation of puzzler already being thoroughly indoctrinated! 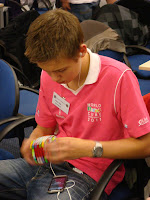 Later that afternoon we wandered back into town to have a look in on the first stages of the speed-cubing competition and to see if any of the purveyors of fine puzzles had set up their stalls yet. We’d been assured that Wil would be there and had a pretty good idea that Bernhard Schweitzer of Puzzlewood fame would be there too. We peered in on the speed-cubers upstairs for just long enough to appear interested and then went back downstairs to find Wil and Bernhard in full flow setting up their stalls for the next day.

Wil had already covered four or five tables in a series of plastic crates, some of them two or three crates deep. Nigel and Wil were introduced and I left Nigel trawling through Wil’s crates while I went off to introduce myself to Bernhard. When I wandered up to his table he was demonstrating one of his Smarteggs to a rather interested puzzler who then promptly went and vanished when I introduced myself with “Hi, I’m Allard and I’m hoping that one of those is for me” – I’d asked Bernhard to reserve one for me after he announced on Renegades that he’d secured a couple for sale at a rather reasonable price – but I’ll tell you more about all that once I’ve had a chance to play with the Smartegg itself.

Bernhard had a great selection of items from his gallery, including a number of little things that hadn’t been for sale for a while ... then he also had a couple of plastic crates of one-offs,  remainders from IPPs gone by – and seeing as how it was the day before the puzzle day, as it were, there weren’t many other folk clamouring to get their paws on stuff, so I had a leisurely trawl through the boxes and found a couple of little gems, including a Sandfield Spider’s Secret from a while back, a competition-entry sized Tornado and a Pelikan reproduction of Trevor Woods’ Trev’s Diabolical Fives. The craftsmanship on the latter is really staggering and it’s easy to believe Bernhard when he says that they’re the only ones who’ve been allowed to make these reproductions.

Bernhard also had some Ambigram Burrs on offer and I rather liked the look of those, along with really liking the mechanism and the in-jokes that go along with it. Bernhard made sure that folks who didn’t know about the Ambigram’s uniqueness heard the story about an unfortunate customer who firmly believed that it was some form of a standard 6-piece board burr, treated it appropriately and promptly tore it to bits trying to take it apart. [It’s made up of four identical if not rather unusually shaped pieces – but the detailing and finish would have your eyes tell you otherwise.]

Things started winding down for the day at the Micro Centre and we made plans to meet Wil and Bernhard for some dinner a bit later. Nigel headed off to his room to catch some sleep, having had such an early start that morning that he hadn’t got any sleep at all the night before!  Louis and I took our newly acquired puzzles to my room and wiled away a couple of hours puzzling with our new toys.  That session saw Wil’s Evian bottle solved while Louis took photographs as evidence – Wil’s sense of humour comes through in a major way on that puzzle! I popped the rod into my shirt pocket as evidence that I’d solved it for Wil.

We met up in the hotel lobby and wandered back down the road to find a bite to eat. We were hoping to try a Greek restaurant that Bernhard had recommended, only to find that quite a large number of locals had had the same idea and there was a long queue outside, so we switched allegiances and tried the Italian a block away.

Bernhard seems to know his food rather well and felt the need to test their Carpaccio before committing to anything else – sadly the Carpaccio didn’t pass muster (in fairness mine was a bit watery and not especially tasty) so he entertained us while we made our way through our main courses – the pizza was good though! Plenty of chat about puzzles, IPPs past and present and plenty of stories about puzzling personalities.
Bernhard and Wil were on top form and had us royally entertained. After dinner we headed back to the hotel bar for some drinks and some puzzles, and even more puzzling stories. Nigel brought out the Foshe Ring Box he’d acquired from Wil that afternoon and several of us had an unsuccessful go at trying to get into it. We called it a night at a fairly reasonable hour – indicative of the fact that most of us had travelled across to Eindhoven at unsociable hours over the previous day or two.
Posted by allard at 15:35